Don't want to write a 'traditional and polite' but at the moment trite Happy New Year message today, not as I don't wish everyone happiness (as I try my best to do that whatever the damn day is to those that are genuinely kind people -which most are 💖- free hugs are always offered x) but as it just seems bollocks, a complete head up your own arse and oblivious to reality load of shite that I can't comply with.

This year has been awful, worse than having part of your brain scooped out and dealing with the after effects. 2020 and 2021 have made 2016 look like a walk in the fucking park. It was a practice for this shitshow ...  in could I keep going when inside everything was breaking. A practice in trusting and that life is on our side, that good always triumphs evil and our soul contracts are here to evolve us. 💫💖💞

This year I have been destroyed as the strength, resilience and independence I thought both some of my loved ones and most people had, I realised was a crock of shit. They caved at the first or second hurdle, gave into bullies and liars, have defiled their (or even worse their kids) bodies and souls and didn't realise their brain had been manipulated into fear. I have grieved more times than I want to think about, cried to my core about what is happening, fearing for their and humanity's future and wondering where have the rebels, warriors,  black sheep and even those with a bit of spunk left have gone?

I've walked through DIY stores watching big strong men walking around with their face nappy on like good obedient slaves, didn't know whether to laugh or cry at people sitting in their plastic boxes with 'good boy' stickers on in a hospital waiting room, people wearing their muzzles to walk to the loo or move between what they are doing , but then take them off in the same fucking room for whatever activity is acceptable...

When I just simply said NO.

Yet, I'm not physically strong, I have massive anxiety at times, PTSD from looking at surgical blue masks, too much trauma than I want to mention, plus have issues where I can't even verbalise the right words- especially when stressed or questioned. But I am NOT compromising my soul.

Like how the fuck are you existing? Don't you realise you are being laughed at by those orchestrating this farce? Or has the TV washed your brain and the toxins dumbed you down from even being able to think what YOU feel inside?

It's no worse than when a government wants to change your view that a certain type of person is evil enough that we need to bomb and kill them... but the only evil are the ones telling others to throw the bombs in the name of peace. (Yeah fuck for virginity why don't you too 🙄) Since when has fighting solved conflicts? No... that's talking, compromise and listening...realising everyone no matter what their colour, religion or beliefs are tainted by their past. We can only change that through mutual understanding.

Greed rules or the multi billionaires of this world could have stopped global poverty several times over. Don't you wonder who's making money from the vaccines, swabs and masks? How suddenly its fine to pollute the world en mass? Wars are only fought when something worth $$$ can be won. Cancer has more cures than the 'cut, burn or poison' that are the only things legally allowed to be mentioned. Did you know that people have been locked up for curing it? Yes, for curing cancer in people who were  deemed terminal by the NHS and are alive and well... but they were locked up purely as they didn't follow the law ...

Legality is not morality. Never has been.

This world is run by evil, many who admit they are eugenicists. I won't even mention some of the other things I believe happen, but I trust 'truth will out eventually' and just watch several films that are more reality based than you possibly ever realise...

They even admit they have a government fear unit, designed to keep you in enough fear to comply. Think - why on earth they would want a population in fear, if it wasnt to keep them under control...?

Same reason we have schools... (you know you can home educate and you don't have to 'teach' your child 'the curriculum'?) Schools just teach you to follow the damn rules and you are not a priority, to follow the system until you die. Do you own thing and you are ignored or punished, where even amazing talent doesn't matter if its not on the syllabus. It's certainly not encouraged. Is that what you want for your child?

But...Yes you are a priority!!! A sovereign human that doesn't have to mould to the rules.

You are a soul who deserves much more than this,

just as we all do.

I don't wish you a Happy New Year... I wish you some fucking balls to say no.

To start looking and questioning.

To listen to your own gut, your inner knowing, and your heart.

To think what effect your actions have on the world and if you are part of humanity staying enslaved?

Please start to listen with an open heart ❤ I don't hate you for complying,  I just want you to know you no longer have to if it doesn't feel right TO YOU 💫 (and if it does, and you enjoy having your life controlled, I wish you well x)

With that we ALL can have a 'Happy New Life' without the evil, greedy, rich, 'philanthropic', twats who own most of the world controlling us.

We can all have peace and a happier life then.
I pray for it anyway... for you and your children 🙏💖💫💖🙏

Love you 😘 from Enzo and I on the sofa x 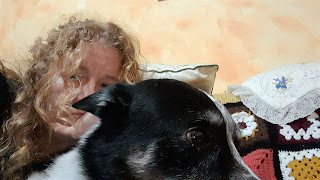