I've been rather silent recently, I honestly feel I have nothing positive to say, nothing cheerful or inspiring to write.

I am stuck indoors most of the day, unable to go out and meet anyone, the activities I used to go stopped long ago, even my own parents have banned me from visiting. My life as it was before March just forgotten about. Unable to go to a gig to unwind and relax for a while - only once they stopped did I fully realise how much they used to help me both physically and mentally by keeping me active and also healing me in so many ways. From enjoying the music, to talking to people, to having to coordinate my body and brain in setting up the PA and guitars while not falling over wires. It challenged and helped strengthen and rewire my brain!

Last summer was bad enough, I had my garden to relax and sunbathe in, as well as growing and cutting back plants which also helped me coordinate myself and watching nature to relax. But since the weather means I am unable to relax outside, I have spent days at a time indoors, often in tears. Just wondering how much longer we can go on with barely any income, stuck in a small house all day and night. Some days if my family are in the front room and it's too much or I want to do something quiet I end up spending much of the day sitting on my bed. 😔

Then a couple of weeks ago I had just finished my dog walk round the park (the highlight of my day now!) and was sitting on 'my tree' at the exit, when I suddenly had this feeling of my Nan and Gran (who decades ago both used to live off the same road as me) and the simultaneous thought that:

WW3 is here but this time it's a silent psychological war.

It seems many people are too terrified to listen to even the most basic of 'alternative information' (eg anything not from the BBC, or the mainstream media and newspapers.) Not even able to comprehend there may be another side to the story different to what is being shouted every day and night from the 5 differently run mainstream media groups. (Yes all TV and media is run by 5 different people)

Yet many have not even read the information from the 1000s of doctors, scientists and researchers who say the PCR tests are useless, the deaths shouldn't be recorded as Covid if, for example, they die of terminal cancer but they are within 28 days of a 'positive (faulty) test, that this is not a 'traditional vaccine' but an 'experimental medical treatment'. (Some listed on a previous blog post)

All the vaccines are still in trial stage. (Look on their inserts) Vaccines normally have between 5 and 20 years of testing, so clearly they have not been tested long term.Yes, more people may have been working on them, but they cannot speed up safety trials and what happens after a year, or 5. They were not tested in people with other medical conditions, the young or the old. There is no data on fertility - women were made to be taking contraception before starting the trial. They do not have the normal medicine marketing authorisation, but a temporary authorisation. What happens if they trigger cancer, or an enhanced immune response after a few months? Most people are not knowing that rna vaccines have never got past animal experiments before as the animals either died upon exposure to the real virus, had serious auto immunity issues, or were made infertile as the rna attacked the placenta causing miscarriage.

The Astrazeneca one instead having chimpanzee virus, mixed with aborted fetus cells by genetic engineering. (see here for the government website details) Sorry, but have you ever heard that SV40 - which has caused millions of deaths from cancer - was believed to have been given to people via polio vaccines that used monkeys in the manufacturing process? Or HIV is thought to be started from similar use of primates with SIV in vaccine manufacture? See the SV40 cancer foundation, The Lancet, the National Geographic.

This was mentioned in even mainstream articles late last year, but have now been 'fact checked' as false ..! So even when scientists have genuine concerns about the vaccine, the media is not allowed to let you know these concerns. Make out you are an idiot for not trusting them as a (paid) 'fact checker' has proved otherwise!! 😬 Its far easier to not get someone to actually research for themselves when they are told they are listening to 'fake news' and must be an anti vax, conspiracy theorist to even question it. So as most don't want to appear stupid or believe our government is not purely trying its best, don't even question.

Yet despite many of these concerns or details being on the actual vaccine insert, or written in medical articles (such as a reviewed Pub Med articles) written by scientists, you cannot tell people. Videos from Doctors concerned with the vaccine are removed from the internet - free speech has gone. (This is here at the moment)

Social media bans or removes even your 100% 'factual' comments (such as info on the vaccine insert), people ridicule you without even doing a single piece of research of their own. (Although strangely as I have been following these issues for years I, like many others, have actually predicted many of these conspiracy theories which have since become conspiracy fact, or potential fact... like saying they wanted to introduce 'mandatory' vaccines (although its not legally mandatory, people have been told they will lose their job if they don't comply) or vaccine passports, saying vitamin c can cure all sorts of viruses and infections, autism is triggered by vaccines, that they want to stop cash...)

I feel that I am unable to even warn people as they go off to 'battle the virus' with their vaccination and yet feel they are now just playing Russian Roulette with their life, they are in a medical trial without even getting paid, and one that if it goes wrong they cannot do anything about. 😔 (You can't detox if some of the concerned scientists are correct and your DNA is changed)

I am now hearing from friends that they know people in care homes (who have been unable to see their family for 10 months) dying shortly after they had the vaccine. Apparently care homes are having a huge increase in deaths. This plan, whatever it is, clearly isn't working for their benefit.

We are fed fear 24/7. The death stats are daily. A new strain. A more deadly strain. You will die, or kill Granny, if you don't wear your mask, if you dare meet up with someone else, even someone who is well... as you may be a spreader!

Plus there is the nocebo effect that no one even mentions...
If you believe you will get ill, or have a positive test then you could well get sick, feel worse or even die
- purely from this belief.

I heard about this a few years ago when I heard David Hamilton talk about the nocebo effect, some of which is written here. Web MD and Psychology Today also have good info. Yet when was the last time you heard a positive mainstream media, or government article on Covid? One telling you to take high dose Vitamin C at the start of any signs. That combined with Vitamin D and |Zinc you can build your immunity up to lessen your chances of even getting it. Telling you to do things to reduce your fear and stress?

It's been a farce over the last 10 months or so, the government constantly changing its 'rules'. The outright lies. The twisted stats. The controlling. Making out you are a Granny killer if you don't do as you are told. (Almost all of them disputed by prominent virologists etc) Yet even psychopaths don't make their lies this obvious.

How many have died from stress, depression, loneliness and the nocebo effect alone?

... So as I was sitting on my tree, I just sobbed with my Nan and Gran in this realisation. I felt them trying to give me strength 💜 While also hearing the comment from Hermione, in the Harry Potter books, when she fully realises that Voldemort is back "Everything's going to change now, isn't it?"

And yes I fully believe this is a psychological war... 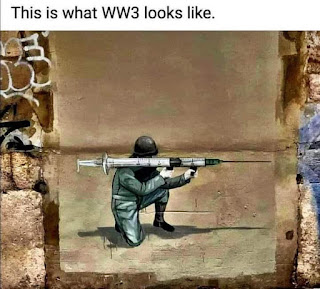 ...and one people need to wake up to if we are going to be able to win.