When I left my neurosurgeons office after my 12 month scan and follow up, I was told I was ‘back to normal’. Now I fully understood and was enormously grateful that I was classed as ‘normal’ by the hospital, my tumour was gone, I was not needing any further treatment, I didn’t even need to take any medication. Yet I certainly was not back to the same position I was prior to my surgery. Well prior to the time my symptoms of feeling ‘drunk’ and wobbly started!

Many a time since then I have had to pull myself together to go for a walk with the dog as I was having a wobbly day and felt I was somehow buzzing inside, been extra careful not to drop cups, glasses or knives when in the kitchen, carrying an item with a very conscious thought about doing so, felt anxiety as my balance was not right when shopping and I felt a bit 'spaced', had to actively think and control how I was walking over steps, wires, uneven ground or even work out how to manoeuvre round people who were ‘in my way’. Sometimes just using a public toilet felt like a challenge as to if anyone would notice anything or dealing with the horrid feeling of being dizzy and wobbly simply from walking in a zig-zagging queue at a resort or the train station.

Yet part of me still struggled with the feeling that no one
really believed me.
‘My tumour was out, I should be better by now and back to normal’.
It was certainly an invisible issue.

Often I don't think even my family knew anything...

Frequently the balance issues were combined with the fear the feeling would go on forever. Then if I had a few good days, even weeks, when it returned I worried what was going on? Was this again the sign that my tumour could be returning?!

If having a chunk of brain missing caused this, then why does no one seem to really care, or even mention I might still struggle?

I guess I accepted it rather frustratedly. (My husband would probably say I whined through it!!😂)  I knew it was ‘my new normal’, and knew doing anything even the smallest bit stressful made it worse. – I knew that, but some days it was very much tougher to accept than others.

Balance, coordination and feeling dizzy (or wobbly) has been one of the main issues on my Hemangioblastoma Facebook group, not surprisingly since the majority of us have had a tumour on their cerebellum! Yet much of the time others say they are much better since before surgery, the symptoms are mild, infrequent, worse with stress and they have also accepted their ‘new normal’.

But a couple of weeks ago, someone posted they were still having coordination problems while walking and feel dizzy nearly 2 years after surgery, and asked “Is this normal?”

These were the replies from others who also had a cerebellar Hemangioblastoma and subsequent surgery:

"Coming up a year since op for me, wore boots with a small heel on Saturday and that threw my gyro off a wee bit. 😁"

"I am 1-year post surgery this week and I still get very dizzy especially after looking up or bending down."

"Yes, I have too. I find that I have to think about and plan my walking. It is tiresome, but you just have to try to adjust to the 'normal' that is today. I walk on the beach and uneven terrain a lot in order to 'relearn' - not easy."

"I occasionally have balance issues. Not all of the time. My wife says that I always lean to the left. 3 years post-surgery."

"I'm with you. And it is disturbing. I have been fortunate to now see a Neurologist and neuro physio. Not miracle workers but they do understand and give appropriate exercises to me. Some days worse than others".

"It's a very hidden disability."

And even after many years, others still struggle at times:

"I also have coordination issues (I'm almost 12 years post-surgery.) Like others I have gotten better at learning what makes it better or worse. For the first 2-3 years I would be more prone to get dizzy when walking in supermarkets or in crowds with all the movement in my peripheral (not sure if that makes sense but that is the best I can describe it.) That has gotten much better over the years and now only seems to be worse when I am dehydrated, or things are moving really fast past me - so things like amusement park rides are completely out of the question.  I also get dizzy if I am laying on my back and looking straight up or move my head too quickly from side to side. I also have had to change to a small heel but mostly stick to flats just because I feel more stable in them. I also have noticed that my brain gets tired a lot more quickly than it used to, so the more work it has to do the more tired I get and the more off balance I feel. This Zoom fatigue is a real deal for me! All and all I have been very luck and blessed to have recovered as well as I have but still have my days that I struggle with the new normal."

"I had occasional problems for 14 years after my surgery. My cerebellum had been squeezed by the tumour and didn't fully return to its original shape. I could correct most missteps without anyone noticing but when I walk with someone for a distance, I probably bump into them once or twice."

"I had my surgery 15 years ago and, in that time, I got probably 97% of my balance back. It should keep getting better but I'm not sure how much is better balance and how much is my adapting to my imperfect balance. Biggest problems: If I walk with someone for more than about 200 feet, I will probably bump into them at least once. If I'm in the shower, turning my head with my eyes closed is disorienting and I've learned to touch one of the walls when I do that. Uneven surfaces can be difficult, especially if they are uneven due to snow or ice."

"I've not had any scans since the initial one post-surgery, but similarly can have the odd 'mis-step' (21 years on). My brain was also very squeezed due to the cyst, and I tend to just put these things down to 'being me'.
I don't think there is a 'normal', just a new normal for you.

There are balance exercises that may help, as might walking with a stick. I know it can certainly give confidence.
I can still get dizzy if I have to move my head from side to side fast, or look up, and get a head over heels sensation if I lie straight back. So I'm just careful / know to avoid doing these things. After all this time, I tend to forget what's happened (re tumour) and have just adjusted my ways accordingly.

2 years is still pretty early on. I know you've done a lot if walking, so you're doing the right things. Time will help, both with healing and with the way you do things / coping strategies, which just become 'normal'.🙂"

My own reply was:

“My walking is OK. Unless I need to move out the way of something or someone. Then I am likely to wobble into them! 😬

Dizziness varies, some days I don’t notice it, days like today I feel I am having to control myself with every single thing I do. Make a conscious effort to walk straight and not trip, I find walking backwards and forwards such as in these insane lockdown queues makes me feel awful, plus the anger of having to be controlled like sheep angers me immensely 🤨 I've certainly had a few days this week of thinking will this go on forever? 😢

The frequency of struggling has definitely reduced over time, but getting stressed or doing too much makes it worse again. I’m honestly not sure if it’s at a better level or not when it does return...?

I think it probably seems worse when I have been feeling better to struggle again, as my patience is less and I am more sensitive to feeling 'off' from past experience and not knowing the cause of its return😕

I understand that you are frustrated not knowing if it will get better, but I don’t think the neuro team can ever tell you... it’s so variable on so much.

I think the more we challenge it (by walking on rough ground, or by turning head as we walk) it can reconnect the brains neurons - which help. I had to do this most times I walked for months, even years, after surgery, to get my balance back so that my brain didn’t react wrongly each time I moved.

Plus, we need to find our limits. My symptoms are FAR worse when stressed, tired or I feel pressured or need to do something else that I find tough.

Also, if someone listens to me it helps me in that they know I am struggling and just that in itself often seems to reduce any issues, knowing I won’t be judged. The more I focus on the negative and get worried about it, the more it seems to multiply...

I have definitely had to change some things I used to enjoy though, art and crafts being the main one - I just don’t have the coordination in my hands now. 😢"

This week I challenged my balance by walking on the beach, yet feeling rather freed in the fact that walking on piles of stones isn't easy for anyone and enjoying the letting go in accepting the wobbling.

I have the gratitude and reassurance that my 4 year scan didn't show any issues. (apart from the known missing bits! 😬😄)

And from these comments from others, I've certainly been comforted that my "new normal" is indeed "normal" for when your cerebellum has had a tumour removed and been damaged.🎔 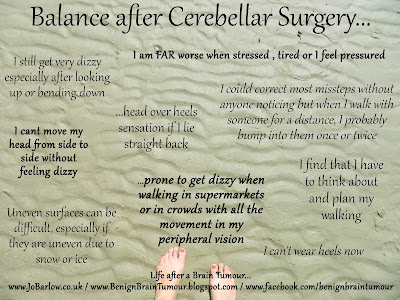 It may also help you to read my previous post