Someone asked me today what the symptoms of my Brain Tumour were, as they had been having odd head pains and were worried of the cause.

All of my day to day concerns, how it progressed and how I was feeling at the time were written in my book - IT'S ALL IN MY HEAD. My tumour was a 3cm benign, Hemangioblastoma in the right side of my cerebellum.

However these were the symptoms I took to my GP on the 23rd March 2016 (written in the main text) and then the added symptoms I discussed with the private Rheumatologist on the 13th April (written in blue italic text.) To be honest I didn't even get chance to discuss the last parts as once he saw me walk he strongly suggested I should be having an MRI to check for a brain issue...

But just looking at these dates, less than a month apart shows how fast things were changing.

So I had written:


Symptoms for a while

End November - painted ceiling. Had to hold neck up to finish as neck felt weak and sore. After had sharp pains in neck like someone flicking elastic bands at me.

December - saw osteopath x2 as pains not better, told to not do exercises until totally better- which it never has. Started taking B12. Wearing scarves to keep neck warm as got less pains. Started getting pain and ache in atlas joint hormonally – it started when period did and gradually reduced.

January - Dizziness and brain fog started. Panicking as legs felt weak and I was ‘drunk’ (I don’t drink- I don’t like the feeling!)  Awful when sit down (after being up), worse when sneeze, cough or strain- whole atlas area hurts/pounds. Stopped B12 and felt a little less dizzy.

February - 18/2  - opticians. Blurriness is astigmatism, given glasses as they may help. But they were opposite to what I was prescribed 2 years ago and no longer help.

22/2 – Physio- given neck exercises, but sure they make me more dizzy if I do more than a few. Told them that and said I should continue. (I feel I shouldn’t)


Headache for whole of period.


March - 9/3 – had neck X-rays. First one was asked to do again as she thought I had my neck crooked, but 2nd was worse- said it looks like bones are OK, but muscles are not and causing a bent neck. Took one from front when I said I was asking for neurologist appointment.

22/3 -  Physio- massaged atlas joint/ neck. Says does not think dizziness is just related to pain. Told I should still do exercises (even tho I think they are making dizziness worse) as my neck is tightening up. Felt better for a while after.

Said the my neck clicking is arthritis- even though I didn’t have it before December.

It is now totally taking over my life - I cannot go out alone, panic when I do if get dizzy. Headaches starting in night (3am > ) can’t sleep. Driving at night harder- car/street lights too bright, road feels its ‘coming at me’. Don’t feel my legs are connected to brain.

Know I am totally stressed – both physically and mentally.
Tired. Tearful. Depressed. Exhausted.

23/3 – GP is referring me to neurologist. Neck x-rays were normal.

27/3 - Headache started with period- gradually increasing in pain. Most of the night I could not get comfy, had to sit up on pillows. Couldn’t get to sleep until 1ish. Woke at 4 with severe pain that lasted until 8-9.  Went back to sleep soundly until 10-11. When got up the pain got better. Almost felt OK at times. (but hurt if i moved and went to loo etc)

Took paracetamol and used ibuprofen gel which numbed some of the pain but I could still feel it. (and I DON’T take pain killers. Taking 2 tablets gave me nausea, even when taken with food!)


April - 2/4- Headache had started to lessen, but came back as had a cold! Couldn’t blow my nose as head felt it would explode. Sitting on sofa barely able to move and just crying from pain.

Pains with both period and cold mainly in back - right of atlas, transferring to back of right eye, and sometimes top of head.

Huge waves of pain in neck/back of head whenever I moved – so that I felt I was twitching with pain.


Atlas area hurts, and sometimes pounds, when I move head wrong- esp if turn to look slightly behind me to right, and also get dizzy at same time. Often have muscles in knots in neck. Am limited in so much.


Want to know I am not causing any damage when I turn etc as it feels something is badly wrong to hurt this much.


How do I know its not … damaging nerves in neck? Chiari malformation? Related to Neuro issues? (esp more severe ones) Brain Tumour? 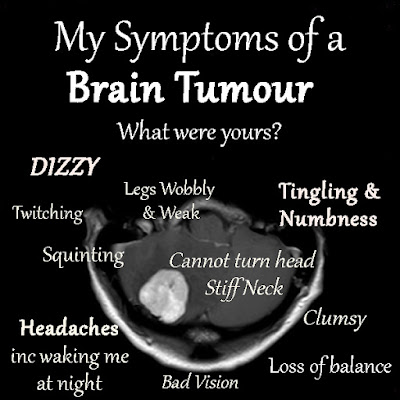