My 10 Alternative Must Have’s for After Brain Surgery

I found Arnica tablets amazing pain killers and they don't cause me any stomach issues that conventional pain killers do. The best bit is it doesn't cause side effects and you can take homeopathy alongside any other medication you need. I would suggest that you get 'permission' from the hospital to use it before your surgery as initially I was not 'allowed' it until the pharmacy checked it was OK. Just after surgery I really couldn't cope with this argument - so I just shouted at them until they allowed me to take it!😬 ... (Please note this is not the same for Herbal Arnica, which the hospital pharmacy said can interfere with medications and I definitely couldn't use)
As my vision and coordination were struggling I put a tablet in a bottle of water and took regular sips of it, but you can also take as directed. 200c is stronger than 30c, but you can often get 30c in many chemists easily - you just need to take them more often!

Putting Arnica cream on my neck an inch or so away from the scar felt like someone giving me a cooling neck massage. (You should not apply it to any wound, much less one on your head) I asked someone to rub it in about 4 x a day and again it really felt like it reduced the pain and bruising associated with surgery.

I also used remedies from a homeopathy kit, I specifically used Hypericum for the nerve damage and Phosphorus which helped with the stomach bloating, pain and nausea after anesthetic. But speak to a homeopath if you are not already using homeopathy.

Ginger Tea sorted out my dodgy stomach pain and nausea each time almost as soon as I drunk it! I had to drink Ginger several times when at home as paracetamol made me nauseous, as did looking at screens or being in a car. I just wish they had it in the hospital!

Manuka Honey was so soothing and healing for the after effects caused from the tube down my throat during surgery. Having a raw throat had meant it was hard to swallow …but a couple of spoonfuls of honey a few times within one day and this soreness had gone - the scratchiness and pain just disappeared. Alternatively raw honey will be healing too- just don't buy cheap processed heated honey, make sure it's raw.

A V shaped pillow, cuddly toy or small pillow were so helpful. I was given a soft toy by a friend when she found out I was ill, I only took it to hospital as my youngest son also had a cuddly toy rabbit at home and we agreed he could hug his and I would hug my similar cuddly toy so we could both get a hug when apart. 😊
But…it was amazing! When one side of my head was swollen after surgery, I could put the toy on the other side and prop myself up. Sometimes I just used the ears or thinner legs of it, other times the whole body of it. I could even just put it under my neck to one side and wedge myself straight that way. So much more practical than hospital pillows! (A small pillow or flexible travel pillow might work as well)
When I came home I used a v-pillow, again this was bliss as I could prop my head within the v – leaving the scar and sore areas not touching anything. Although I often swapped it around with a small sofa cushion or the cuddly toy so I was able to move from one supportive pillow to another as I was unable to stay still for too long without it hurting.

I needed to keep sounds out and not be distracted by all the bleeps etc, especially as the mixture of steroids and brain surgery sent me into high alert. A simple bleep sounded like an alarm clock in my brain! It also gave me something to listen to, relax to, try to meditate etc… plus drown out the awful sounds of others in the ward groaning as in pain. It seriously kept me sane! 😬 If you can manage the sounds better and don't need totally distracting then maybe ear plugs and a eye mask would be better?

You need clothes you can pull up over your hips if possible. You do not want anything going over your head, you cant even get your arms up there anyway! Nor would you want buttons if at all possible as they are really uncomfortable to lean on. I just lived in stretchy leggings , a stretchy t-shirt type vest that I could pull over my hips, and a cropped bra top that also did the same. These were comfy enough to sleep in too.
I also had a loose black wrap type cardigan that as well as keeping my shoulders warm, I could pull over my eyes and use as a face mask when I wanted to sleep, without covering my whole face. Or use it to block out the lights - which was very much needed.

After surgery my hair was glued away from my scar, sticking up like something from a zombie movie, and I was told to gently brush the glue out. I didn't want to use an old comb with germs on near my scar and so had to get my husband to buy a new de-tangling comb and soft hair bands. If I had known I would have bought them beforehand.

I had used Frankincense oil before my surgery, but didn't use it while I was taking any medication in hospital (it was bad enough getting them to agree to my homeopathy!) and then I didn't remember to take it for a week or so after. But when I did I think of taking it again it seemed to help with my headaches and possibly even help the fluid that was in my head and neck disperse. (I had this fluid checked by my Neurosurgeon and it was not putting pressure on my brain or needing a shunt) There are growing studies to say Frankincense can help with cerebral edema, and even brain tumours. (I have a few links on my website here)

Even using it as a fragrance in the room was helpful and relaxing, you can also use it (diluted) on your skin or even take a drop of it internally. (But do check this for yourself and if it could interfere with any medication) I have found rubbing on my skin a couple of drops near my temples, and/or near my scar, can stop a headache.

Make sure you buy a good quality essential oil as some are just cheap fragrance. I used doTerra as I know they have a high safety testing, and so signed up to get it at wholesale discount. Please buy from me or buy elsewhere if you prefer. x 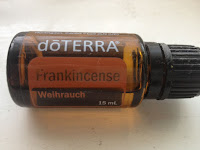