When things are too much…

Today I should have had my online shopping order arrive. I made sure I had enough in my account by 10am, I had set myself a reminder to sort out a payment. (This can be quite a challenge, as I often ask and forget to check if it has been done.) I had received a conformation email to say they were delivering it at 2-3pm.

At 3.10 I realised it was not here, so checked my bank account to find the money had not been taken. Yet on my Sainsbury's account it still said the items were due for delivery. So I called them. To find out they had tried to process the order early this morning, yet when it didn’t go through they didn’t bother to try payment again, nor to call me to see if I wanted to pay by a different card etc as is their policy.

So I had no shopping.😟

Then the rather unhelpful customer service agent told me I would have to change it online myself to rearrange delivery (‘Just order it all again’) as they could not do it for me. (Which they have done once before when I messed up a payment.)

At this point I am getting more and more frustrated so much so that in the end I can barely say a normal sentence without making a mistake or saying the wrong word.


I can hear the person on the phone thinking ‘It’s a ranting nutter’ and not caring or even listening as he just stopped being helpful.

In the end after asking "Should calling me be their policy if the card is declined rather than just cancelling the order?" – Yes – "Then why didn’t they do it?" And him not even being interested or saying he would try and find out what happened and stop it happening again. He didn’t care that I had no shopping, some of which I really needed as had totally run out.

So I told him it was fucking crap customer service, I know I messed up the payment, but they are supposed to contact me to let me know. To which he said he would have to end the call as I swore, and I beat him to ending the call with an ‘Oh fuck off then!’

I cannot cope with people who are supposed to help,
being unhelpful and blank on the phone.
Not even trying to understand.
I can feel the judgement in their voices and lack of caring - and they are in customer services!

I wonder if they know I was not drunk and irate (as they possibly assumed) but instead overwhelmed, stressed and angry?

When I can’t cope, I can’t speak properly,
I say the wrong words, I slur, I swear…

I cannot see the difference between saying ‘It’s really ridiculous’ and ‘It’s fucking ridiculous’ as to me its just a different adverb! Not helping I don’t even know I am swearing when I am overwhelmed.

I am so angry and frustrated that I cannot explain myself. Once again, I feel I should have introduced myself saying:

I then posted on Sainsbury's Facebook page asking why they no longer call? - as is their policy. Yet within a few minutes I had some really rude comments saying it was totally my fault, I should only place an order after pay day etc. Pay day! 😬 Like its as simple as that!! 😂

I wish I got paid enough to not need to order shopping on the day when I can get it delivered for free, nor as close to my budget as possible, so I don't always have to choose what is priority within this limit. That people paid my husband on time...


"Please do not comment if you don’t know the circumstances"

Yet still got ridiculed in further comments, as well as laughing emoji's. 😢


How do they know if I am not able to remember to get the money in my account in time? Had them change what items are available from what I ordered so the cost is more than I planned for? Or many other reasons why people sometimes struggle with payment..?

After about 10 minutes I had so many rude ridiculing comments that I deleted the thread. Disgusted with how uncaring people can be.

I spent the rest of the day and evening in floods of tears as I felt everyone’s hate at my ‘stupidity', not a single person caring why.

Once again struggling with WHY I got a brain tumour.
How it has affected my memory and being able to deal with basic things, and also the fact that it robbed us of finances.


And barely anyone understands, or even cares.

Would it help if they did though? With some people I doubt it… 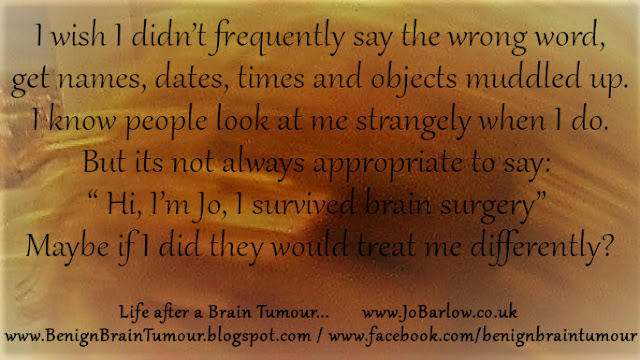