Today someone posted an article online about people drinking tap water in bars and restaurants, and how it was ruining business… which I do and don’t understand. As while I can understand if loads of people did this they would have problems, realistically how many people actually drink water in pubs and are not with someone who is drinking? How much does it actually cost them to leave a water dispenser on the side for the few that do? Making the pub suitable for 'all' the people who want to go, not just those who buy loads of alcohol! Plus, if you are an eating venue and most people want to drink water with their meal, then surely you just increase your food prices?

But I commented explaining the reason I don’t drink paid drinks - is as there is nothing I like available in most pubs or restaurants. I don’t drink alcohol, nor colas, nor the typical fruit juice drinks with loads of unhealthy aspartame, and I don’t want to contribute to plastic pollution by buying bottled water. So as they don’t sell herbal teas, coconut water, natural fruit presse or fresh fruit juice (the only things I drink) … basically, I am left with tap water. (Which is what I mainly drink at home – I’m not just being tight)

I was curious to know how much a pub would think I could ‘donate’ for use of glasses etc and asked them this. (I know pubs legally have to offer you tap water). The reply was to pay the same as someone would for cola etc?! which somewhat confused me as tap water is all but free and they don’t have to buy it like they would cola. The suggestion of £3 a pint seems a bit steep when it’s from a tap!

I offered to pay a couple of quid towards costs, but apparently that 'wasn’t touching it'… so after a very rude "even if you don't come in again I'm at no loss 😂" I realised I am clearly not wanted in this particular pub and so won’t be going back.

No matter that I advertise their pub each time I go there (I advertise Dave’s bands that play in the venue) and people come with us to see the band, talk to me etc. Plus, I am driving which means my husband can have a drink, and we often take another 1 or 2 people with us – also drinking! If I don’t go then Dave will only be able to buy 1 drink as he will have to drive, meaning they will lose more income than if I was there?!😑…but hey ho I know when I’m not wanted…

But today this has made me really upset.

Like I am not acceptable as I don’t conform. (Although I admit I don’t know that I want to conform to pubs either!!) But I thought this place understood me, that I don’t drink alcohol, that I had been ill (and so probably couldn't even if I wanted do), and all the rest… but I realised that belief was bullshit. As IF they cared about their customers, they would have realised that I bring in more money than they spend out on me!

Not to mention - I don’t spill drinks, get violent or vomit in the loos! Nor forgetting that (at first) I was more than happy to give a few £s towards costs anyway.

But they obviously see me as worthless to the pub. On the surface I don’t pay anything, and they can’t see beyond that.

Do people think that of me as a person?
As I don’t work and don’t ‘contribute’ money to society?

Forgetting that I have raised 4 children, 3 of them adults. Who hopefully don’t need lots of support of health resources as I have brought them up the best I can, two of whom are working and helping others in what they do. Paying taxes.

A few years before my brain tumour, I was self-employed with Dave helping with his website work  (and we did other self-employed work before that, and before that I was childminding), but a year before I knew about my tumour I stopped working with Dave. My fatigue was getting worse, I couldn’t cope with his work, the house and looking after the kids … when I found out about the tumour it all started to make sense.

My brain, and therefore body, had been struggling.

Last year Dave had to get a ‘proper job’ (as well as being self employed) as he’d lost most of our customers when I was ill as he had to spend so much time looking after me. Although, as he had been here daily since my surgery, I was terrified of him not being here each day. Before we knew he was going to start working there I gradually built up my tolerance to trying to cook dinner each day, managing by myself and not falling asleep.

Some weeks I can do this OK, as I feel mentally and physically fine. Yet others I cannot. I feel so useless saying can he cook when he has just got back in from work.  At times cooking dinner seems as hard as saying 'you need to climb this mountain tonight'. Its not just the physical energy, it’s the coordination, the planning, the remembering not to burn something and get the timings right.

Even when I do cook if I am tired, I need Dave (or someone) to run through what I am doing. Who wants what and when shall I start it?

It sounds absolutely pathetic even saying this,
but the brain blank is just ... well ... blank!

I desperately could do with some extra money, but what do you do when you struggle to wake, still need to rest or sleep during the day.  When I am tired, I struggle speaking and cannot explain myself easily, make loads of mistakes, drop things, get confused, can’t give directions or instructions, or even stay standing up for long ... plus I don’t have any means of transport now and even getting somewhere on the bus uses up much of my mental energy…

I would like to do some kind of voluntary work, which would hopefully lead to an income …somehow. Working with those with a brain injury. I have been there – I understand. But I don’t yet know how...? I love writing and wish to combine the two.

I have been told my book, blog and Facebook page have helped others (I have the loveliest of emails from others with brain tumours thanking me💜) But I don’t get paid much for writing - yet!

So, in the meantime, society makes me feel worthless. They cannot see (just like the publican who can’t see I bring people buying drinks to the pub) that I am helping others. Yet maybe if I write a blog post, or give someone else help and support, it means they won’t need another nurse appointment or to see a counsellor, or that I encourage them to eat better and improve their health… even get back to work quicker?

So today I am feeling worthless… and attacked. 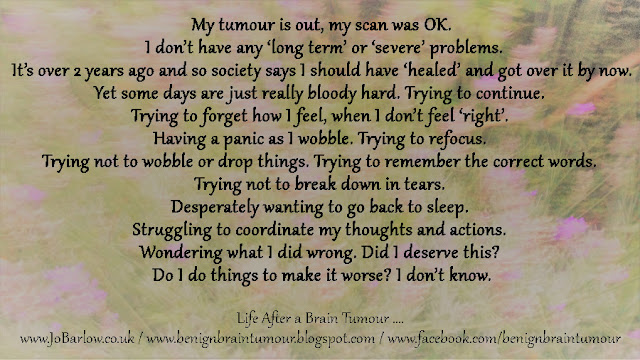