5 Alternative Things that Helped Me While Waiting for Brain Surgery

I took this as soon as I knew I had a Brain Tumour, a drop on my tongue 2 or 3 times a day as well as some rubbed on around the back of my neck. (Most people say it should be diluted - although I used it neat and it didn't cause a skin reaction) After a couple of days, the headaches that had made me wince with severe pain and I could barely move from, subsided. I had less pounding inside my head (even with all the crying I did as I had just found out I had a Brain Tumour!) and the headaches stayed away.

I remember saying at the time maybe ‘now I knew the cause’ my body didn’t have to shout at me to address the problem.

But after I went to my pre-op appointment I was told to stop this and all supplements, which I did.

Two days later the headaches started again, a further two more days and they were so bad again I had to go back to A&E to get them checked. This was when I was admitted with hydrocephalus and my operation date brought forwards.

I am sure the frankincense helped reduce the swelling in this time and so reduce the pain (as has been shown in some scientific studies - some are on my website here.)

I signed up to doTerra as this helped me get my own oil cheaper. Please buy from me, or elsewhere if you prefer. But if you want to ingest essential oil, do make sure the brand is safe to do so.

This was one of the few things that calmed me down. I stayed with an iPod plugged in most evenings and when I needed to relax by day. I listened a couple of times a day to Getting Into The Vortex as it was slow and repetitive, as well as aimed at healing your belief system.

Plus at other times I listened to the iChill music as it was just relaxing, and better for daytime.

I had some Gaia healing – a form of Reiki- from a friend. Even in the midst of being in a total panic I managed to switch off and be fully calm and relaxed, seeing my relaxing colours of purples and yellow. I had also had some Bowen Therapy before I knew about the tumour, it drastically helped my headaches and the dizziness. Re-balanced my system. (It also helped loads after surgery)

But realistically many types of healing would be suitable, Reiki, Acupuncture, Reflexology etc…Whatever you feel will suit and calm you, you can afford and get to.

I am not religious, but I prayed to the universe, the angels and deceased family to help support me.

A friend also was in a healing group where they all sent healing to me at a certain time of the day. Sometimes I forgot what that time was and yet I often realised it was this time as I suddenly felt calmer than I had been. If I relaxed, I often felt waves of calm and clarity come over me, just knowing others cared was a hugely powerful emotion it itself.

When I was waiting for an emergency scan before my op, a woman waiting there also prayed for me. She held my hands and prayed with me for about five minutes that I was healed and tumour free. It was one of the kindest things I have ever experienced. She said exactly what I needed to hear and …just cared! 💖

I have since seen The Power of Eight book and how this simple effect can change many things.

In this time of waiting for surgery I tried to see myself healed and doing things I liked to do again as much as possible. Being able to hug my youngest son, seeing myself without the tumour in my head, having had it removed easily, not needing a blood transfusion (as I was told was likely), getting back home to my bed quickly after surgery. Fully trying to feel the emotions.

I also had an angel card reading from a friend who gave me a reading with a mix of positive response to my surgery as well as prayers to say when I was stressed. They really helped calm me when I felt I couldn’t cope any longer.

I also kept getting the word ‘trust’ being said or seeing it… I knew I had to trust and kept repeating this to myself.

The less alternative - getting outside in the sun, feeling its healing rays and listening to nature as much as I could (even through surburban noise), talking to friends, distracting myself with anything, such as a new TV series. It was hard when I couldn’t read nor easily look at computer screens, the distance TV was just about as much as I could handle but even that I often had to just listen to as looking at the screen was making me dizzier!

I also wrote some my feelings down, to help process and release the pain and fear… very scrawled, as I couldn't read it easily nor coordinate well, but written down.

Much of this became my book, It's all in my Head, written about my personal experience of having a Brain Tumour. 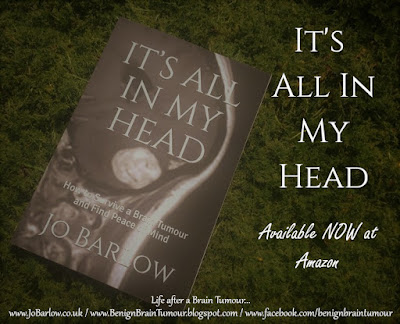