What Do I Wish my Family and Friends Understood After I had Brain Surgery?


Being diagnosed with a brain tumour, only having one appointment my neurosugeon before surgery, not having any other information other than this meeting, yet being told I needed 'urgent' brain surgery and then having the operation brought forward as even more urgent... all within a month of finding out about I had a brain tumour. I had not had much time to register what was happening.

So when I left hospital (which was only 48 hours after the end of surgery) I was in shock.

I felt violated.
Confused.
Trying to work out 'why me'?
Still terrified.
Not quite believing it was over.
Yet elated I had survived.


I felt extremely vulnerable and delicate. My head and neck felt so sore. I couldn’t lean on it, much less sleep comfortably, I needed propping up with pillows, but I could barely do it myself. I felt like a newborn. Everything felt slightly numb.

I couldn't cuddle my 9 year old son, I couldn't even have his weight on my shoulder as it hurt my head and neck so much. I desperately wanted to continue to mother him as before ... but I couldn't. I had to fix and put myself first. Not something that had happened since I started parenting.

I also had all three of my older kids taking qualifications (GCSE's, BTEC and a Degree) yet I could do nothing to support them. I knew I had to put me first. Anyone offering support for them was extremely appreciated.

Then there were the physical effects that I needed to get used to: 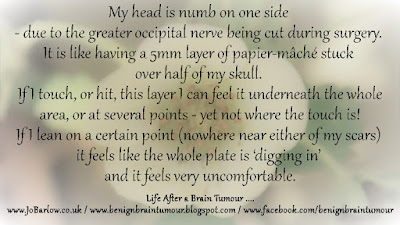 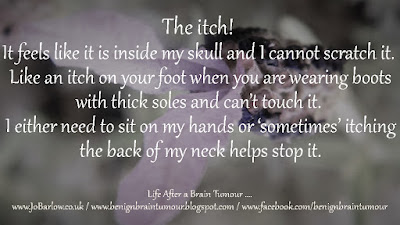 My vision was awful, everything was a bit blurry. Plus I felt my world was constantly spinning. I couldn't watch TV to relax as it made me nauseous, it was worse looking at a computer screen. I could manage to send a short text and that was it, I would have to stop and let the nausea subside.

After a week or so I was all but begging for the dizziness to stop,
to be able to eat dinner and see the spoon go in a straight line to my mouth, not feel like I was eating on a fairground ride.

(I have written about the other side effects I had previously, please see The After Effects of Brain Surgery and Cerebellum Surgery Side Effects)

Household noises such as the washing machine were too much, even a games console whirring was too loud and constant. I couldn’t cope with too many people talking.

Lights also hurt, the light coming through Venetian blinds was in lines and felt like it was flashing! My brain couldn't handle any stimulation.

I spent ages with my eyes shut!

Doing anything was hard. Even walking to the toilet was tough. It hurt to move, I needed someone to walk with me.

I struggled to sit on the loo seat correctly, my body felt fuzzy and so I had to double check I was doing everything ok. Remembering to flush the loo, wash my hands and dry them seemed to be a lot to remember in order.

Trying not to wobble or trip over something, or even just navigate the corners and turning to shut the door. 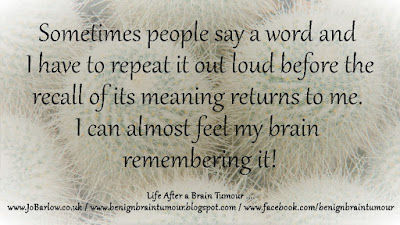 Finding the right words was also hard, most of the time I could say what I felt relatively well (albeit a little slowly), but try and describe something or give instructions of any sort (where memory came into it) was awful. I knew the thoughts were in my head, I just had to access them and this wasn’t a fast response time.

I was terrified on feeling so ‘out of it’, especially when I got tired. Each time I needed to sleep I had to trust that I would be OK, and it was ‘just’ tiredness and not that I was getting ill or having a seizure or blacking out.

The first couple of nights after I came home, I made my husband just hold me as I kept dreaming of a horrid metal taste in my throat and the feeling that someone was putting a tube in it! 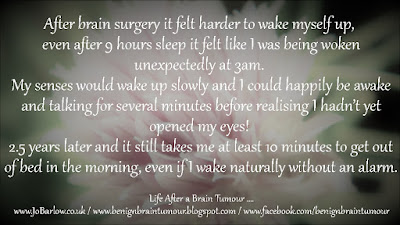 Waking up left me extremely groggy. It took a while for my brain to wake up, and even longer for my eyes to do the same.

I would often lie there with my eyes shut for a while after waking not even realising I hadn't opened them yet.

I wanted someone with me 24/7. To calm and reassure me when the pains were too much or I felt dizzy (I was so scared I would fall over or have a fit) … and also wanted someone to just listen.

Please just listen.
You cannot put it right or change things,
but just listening and understanding helps SO much. 💜

It was great to see people visiting, but also, I couldn’t stay awake for too long. I needed a morning and afternoon nap (for an hour or so!) for months, if I didn’t then I felt awful and got really exhausted later.

For several days, even weeks, if I tried to do anything even as simple as ordering online shopping, going to an appointment to remove staples etc- it just wiped me out. Physically and mentally. Even months later going to one place a day was more than enough.

As I had barely been able to move off the sofa for months, my body strength and muscle mass was bad enough that even walking for a short distance was exhausting. I just had to build my strength up slowly. Very slowly!


Even months later I was still unable to think clearly, or for long: 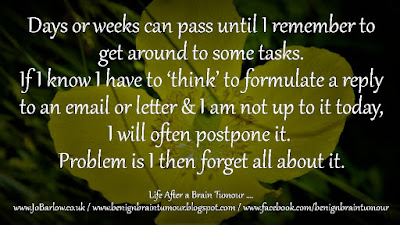 The brain fatigue lasts for not only for months, but years...

I finally feel I am seeing positive improvement three years after my surgery.

I am now able to stay awake for a full day and even go out for the day without having to 'pay for it' later with being extra fatigued.


Yet still, if I have got particularly tired or stressed, my brain starts to 'switch off' again. 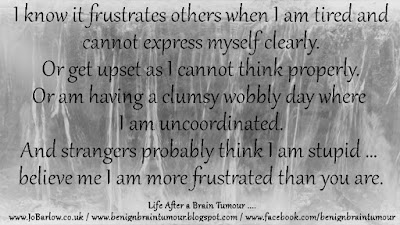 I cannot find words, I stutter, I cannot think clearly or make decisions, and my balance and coordination goes with it.


Even though my surgery was in my cerebellum, it effected so many of even simple normal day to day tasks. I could barely read my own handwriting, and hardly anyone else could decipher it!

I struggled to help my son with 'school' work, I couldn't read things out loud correctly, I couldn't say them correctly either. 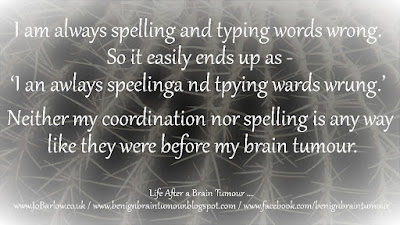 I felt like my brain was failing.
I felt like a failure - to myself and my family.


And even three and a bit years later...probably the hardest thing to 'get over' is the fact that: 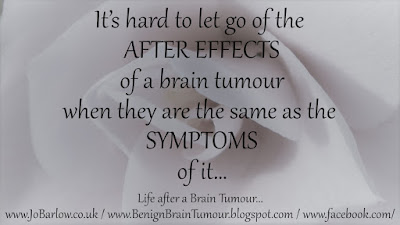