I am always grateful that my surgeon, Tim Jones, did an amazing job and that I didn’t have any major side effects from my somewhat risky brain surgery - where one wrong cut and my tumour was likely to severely bleed, so much so I could bleed to death. I didn’t even need the ‘probable’ blood transfusion, and leaving hospital just 48 hours after the end of surgery is testament to his skill.

I was warned before surgery that I would get side effects, it was made perfectly clear that my head would never feel the same again and so every day the symptoms remind me I am alive and to be grateful for that.


(The symptoms I have in my head I wrote about previously here.)

Here is a list of the other things I struggle with 21 months after my craniotomy:

I drop things easily, cannot easily turn my wrists whilst holding items (e.g. Turning a key in a door while holding a bag is not easy), typing or writing can be a physical struggle to get the correct letters typed in order or written in the right shape. I still struggle a bit when I paint (and I am not doing anything detailed) … a couple of weeks ago I managed to tip a whole bottle of liquid acrylic ink right in my lap. As I stood up it ran down my legs all over the floor! Don’t ask me to catch anything - I will probably break it!


Although within the last year, I have found online others who had a Hemangioblastoma, most of them also in the cerebellum. We all seem to say similar things, both from what happened to us before finding out, to the surgery and the after effects since. Some have had far worse symptoms than me, and constant pain or damage, and some a few less than I have written above, but it seems most of us are very similar.

I was told most of the recovery would be within 2 years of surgery but I also know the brain can still heal, albeit at a slower rate, after this time. I am keeping up the supplements that I feel will support this. As well as listening to my body so I know when to stop, relax or push myself on. 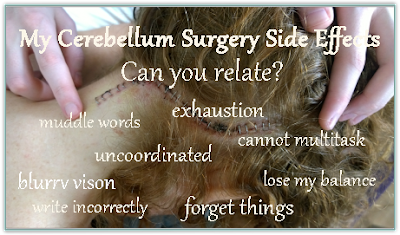