Did my dog smell my tumour?

My dog is a short haired border collie called Enzo, he is super intelligent as well as being amazingly responsive to moods of humans- if we laugh, or even chuckle he starts jumping; if I am sad, or shed a silent tear he comes up and nudges under my arm so I am almost forced to stroke or hug him; if anyone is angry or raises their voice he cowers with his head bowed in the corner of a room.

Sometimes no matter what you say he will want to sit on your lap just for a minute, just enough for you to hold him.

For several years, almost from the time we got him as a 13 weeks old puppy he had on and off issues with his coat, he would bite his lower back and cause sore scabby patches, we thought it was an allergy to fleas- but we had got rid of them, made sure he didn’t eat any food with wheat and even tried avoiding fish and other foods in turn to see if that aggravated it. But it never made any sense, he ate raw food, didn’t eat kibble or other junk, hasn’t ever had any chemicals on him, but nor any difference … his coat still looked patchy and bald at times where he had bitten the fur so much.

But over the last year his coat is getting better and better, he now looks constantly glossy and healthy and there are no bald patches or signs where he has bitten his back.


When I was walking him today another dog walker (who I have not seen for ages) commented that he looked really healthy now and the bald patch had totally gone- had we done anything? The reply that instantaneously came out of my mouth was:

“Not really no, but I wonder if he is better now that I am?”

to which she answered, “Yes you hear of animals who are ill when their owners are, and that they can even pick up on cancers etc.”

Then while I was standing in the middle of the park thinking about her comment, I suddenly realised that Enzo has stopped sniffing behind my ear… oh wow!

Could he previously smell or sense my tumour?


He is has always been a ‘nosey’ dog- everyone who enters the house or even knocks on the door gets their bum sniffed!

But he always used to smell behind my right ear.
Almost daily.


He used to all but climb up where I was sitting and try and smell me, so in the end I started to lean my head down and let him sniff behind my ear and it seemed to satisfy him. I assumed it was as he could smell ‘me’ somehow by doing this in the same way dogs smell each other, and my ear was a good place to smell ‘me’.

Although I had told Dave to let him try smelling his ears too, and yet Enzo didn’t seem to want to. It was always behind my right ear, he would give it a few strong sniffs and it seemed to satisfy him and he would go.

My tumour was all but behind my right ear- was he somehow checking each day to see if I was ok?


Could this have been making him stressed and his coat come up in some stress type allergy?

Then I remembered when I came back after my surgery to remove the tumour (I had been away for 4 days in hospital) he came over to the sofa to sheepishly to sniff me and say hello and he just wanted to smell where my surgery was. We obviously kept him far enough away from the area, but I knew he needed to smell me too, so he sniffed and sniffed and then went to sit down. Like he knew I’d said “hello” and that “I was pleased to see him too, but I couldn’t do much for now.” I wondered back then what he could smell from the surgery and that somehow he knew I was delicate.

He didn’t hassle me for his daily walk, and when at about 3 months after surgery I started to feel I could walk him again (as I had just about got my strength back to hold him on a lead, as well as do one small lap of the park.) When I did, he seemed to be understanding that he couldn’t pull when on the lead or wander off when he was off it– as otherwise I wouldn’t be going to take him out.

But in these few seconds at the park -while all these thoughts instantly whirled round my head and simultaneously made perfect sense, I realised for ages now he hasn’t sniffed behind my ear!

I know I had still been putting my head down for him to smell ‘me’, but he hasn’t wanted to anymore… why did I not realise this before?!

Did my dog know I had a tumour and also know when it had gone?
No wonder they say border collies are an intelligent breed! 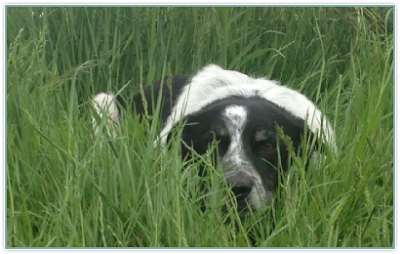