Muddled Words and the Cerebellum

It's past 1.30 am and I am still awake mulling over today's frustrations.

I feel the amount I am saying the wrong words is getting worse. My husband reassures me otherwise, but my memory is so annoying I don't honestly know if it's the same or worsening  I know I am getting angry with myself each time it happens though.😐

Today my daughter went to get items out the still drying and hot dishwasher... I said to her to leave it 'as it's still cooking'. Her and my husband said 'dishwashers don't cook' to which I said 'I know but it's hot' and muttered 'I am fed up with saying the wrong words' 😥... My daughter then said 'Don't blame it on your op mum, as you've always been a bit stupid...'😳

I know I have never been quick witted ever, and even 10 years or so ago a friend said I write far more eloquently than how I speak.  So it's not totally new... 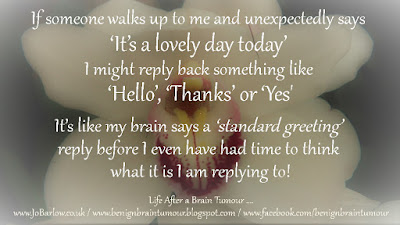 But since surgery I definitely cannot reply easily to brief comments such as passing someone in a shop, give instructions easily, and I get muddled speech, with loads of wrong words, when trying to explain something (especially quickly) ... Since my surgery I have often said random words and had to start again in explaining, especially when I am tired.

But now I'm noticing it more... I don't know if it's as I am doing more, sleeping less (and so my brain is more tired), that my kids keep pointing it out, I am more able to realise I am saying things wrongly ... or I am getting worse... ?

I also wonder if fear of saying things wrong is actually making me stressed and therefore worse?

I know there were a few more instances today of getting wrong words but only a couple more of this 'swapping' of similar words. (Heating and cooking)

I also said this last week, as my mouth now says what it is thinking rather too easily...

Dave told me he saw the dog pee on my mint plants in the garden today. (I had just picked some mint for with our dinner)


I can deal with the fact I say a rude word easily, but I can't deal with it as well when I was sure I said something else. How many other words am I getting wrong and not realising? 😕

Plus it still takes me days, even weeks or months, to remember to do less important tasks. I know I kept thinking I needed to book a dental check up for about 6 weeks before I actually remembered to call. It's taken me a week to remember to bring some bags upstairs to put items for the charity shop in.

As I was getting annoyed with myself this week, I again looked up Cerebellar Cognitive Affective Syndrome. (CCAS)


Why does no one seem to acknowledge this even exists,
or I may be suffering with it?

"..the right side of the cerebellum will be responsible for language"
"It has also been shown that lesions of the right cerebellum result in greater cognitive deficits."

I had a 3cm area on the right side of my cerebellum removed. 😬😥

And others who had the same cerebellar tumours and surgery tell me they struggle in saying and doing things very similarly. I guess it's the cerebellums fine tuning that scientific studies talk about?

I also did the Cerebellar Cognitive Affective Syndrome test. My daughter read the questions to me, and whilst I realise we are only following the questions basically, I failed 4 of them. When it said failing 3 showed CCAS. 😟


Today I'm feeling like so much has been effected,
that no one else even dares to acknowledge and talk about with me.


The only positive thing, is I have finally got my appointment for in November to see the Neuropsychologist ...

I hope this will help.🤞