Depression, Anxiety and No Tribe


Sometimes when I really need something, it just kind of appears in my life. A few weeks ago someone mentioned the book 'Lost Connections' as an amazing read, so I added the book to my Amazon cart. A few days later I received a voucher, so I ordered the book for free.

I spent the next couple of days reading and understanding what he was saying in it... and thinking how life would be so much different if we had financial stability, a different society, a group of people to support us. A tribe.

A couple of weeks after I finished this book, I see this TED talk from the author Johann Hari. It simplifies much of what he said in his book within 20 minutes.

I wonder what it would have been like if someone was there to support me before, during and after my brain surgery? Would I have felt so scared and traumatised if I was able to talk to others about my concerns and them answering from experience?

This was the reason I wrote my book, 'It's All In My Head', and have continued to try and post articles on my Facebook page, keep writing this blog... in the hope that it would help others when they are facing a similar situation in the future.

Yet I know it hasn't reached anywhere near as many people as it could have. I don't have the connections, the support or the money...

And somewhere in this feeling I still can't be useful, the depression and anxiety are back.

I had a honeymoon period after my surgery where the anxiety and depression I have struggled with since a teen, seemed to have been taken out with the tumour... but they've crept back. It feels harder to cope with at times as I know it stopped and fully wonder if I did something for it to return. What did I forget? What changed in my belief system for it to return? What's causing me to be stressed?

Reading this book and watching the TED talk makes me think it's probably just as my life went back to 'normal'...

When you are ill, you are allowed to cry. To be sad, angry, or release whatever emotion you feel. As I wrote in my blog post on 19th December 2017:


"A brain tumour made it understandable. Acceptable. OK. I was allowed to feel whatever emotion I needed.
Justified."

People were there. (Although not Doctors or medical support... but that's a whole different story!) Yet I had more support than normal, a tribe where I felt wanted and worthwhile. People who wanted me to get better, and who listened to the frustrations of it all. Friends brought presents, sent messages or even just give you their time and visit.


"No one tried to talk me out of crying, tell me it was my fault... friends sent healing and support, offers of help,
my husband just held me."

People think its all over and I'm better now. I look well. I don't cry all day. (Well not in public!) My tumour is gone. No one really understands how frustrating the side effects are. Feeling trapped in what I can do to change things. Both from my tumour side effects, as well as my life in general.

People get back to their own lives, their own family, back to our society of making money so they can survive.

Society feels so broken in so many ways.

After reading this book and talk, I wonder what it would be like if someone 'bought a cow' for me now? When I really need support to feel useful and connected.

Is it as Johann Hari says:

A signal of something much more? 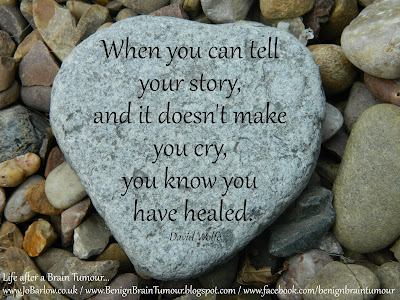