It is now almost 3.5 years since my surgery to remove the tumour, yet I only just feel I am getting my health back.


I admit I have had for years a bit of an exercise phobia as well as health anxiety which had stopped me doing what I thought was 'too much' for many years. Then about 10 years ago I was diagnosed with chronic fatigue. Not really any answer or what to do about it, but it somewhat helped to have a label as a way of explaining to others.

It never felt right though.

So in 2014-15 when I was really struggling with my health and energy and could barely manage more than basic tasks, it just seemed I was getting worse. I limited myself to one task a day. If I went shopping I didn't do it on a day I also took my son out. Everything was planned so I didn't run out of energy.

In 2015, after a meltdown, I decided not to help my husband with his self employed business as I just couldn't manage it all. Not that I was doing a lot to start with.

That year gradually got worse. If I did too much I'd need to rest for a day or so after. Then gradually the feeling I was 'not quite right' started, quickly changing in 2016 into feeling a bit wobbly and off balance, then into feeling downright drunk (Even though I am teetotal) Not to mention the strange shooting pains in my neck, going into my head - like someone flicking an elastic band at me ...

By January 2016 I was almost sofa bound. I had been told by doctors, physiotherapists and osteopaths that I needed to rest my neck, that this should stop my dizziness. So as the headaches started I just stayed there more, to the point that some days I could barely get out of bed from the pain. Needing to have a routine just to be able to sit down without it feeling like my head would explode.

Yet the doctors still didn't think there was anything seriously wrong. Although I did get referred as non urgent to a neurologist for in another few weeks time.

By the time we gave up with the NHS and I had my private MRI, I weighed 8 stone 7. I felt like I was too skinny and ill. This was the day I was told about my tumour. The chronic fatigue finally made sense!

Just over 2 weeks later at my pre op appointment I weighed 7st 13.
I was wasting away.

I was told to fatten myself up. But as I didn't have much appetite I just ate loads of chocolate!  And I did get to a pound or so over 8 stone the day before my op.

This picture was taken on the 15th May,

the day before I went to hospital.


Even though I only spent 4 nights in hospital in total (2 before and 2 after surgery) by the time I came home my legs were so thin that when I looked at them my shinbone was sticking out as the rest of my leg fell away from the bone. It was horrid.

I had so little energy.

It took me over 3 months to be able to walk a short lap around the park with the dog again. I couldn't even manage to carry a washing basket upstairs. When we went to the beach it was as much as I could do to walk through the sand to get to the sea. I was shattered after, needing to sleep.

For the rest of the year I still had to rest after I did anything, even just walking the dog.

However in March 2017 I decided I needed to challenge myself to get fitter, plus also challenge my belief that I couldn't exercise. So I tentatively started to go in the outside gym as I finished the dog walk. I knew I looked pathetic so I tried to go there only when no-one else was there. Thankfully it often was! 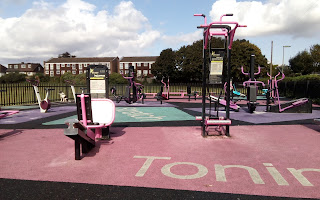 One exercise machine I could barely even lift, as it hurt my neck so much. Well I managed to lift two! 😂 Three of the others I could only do between 10-15 repetitions and I was shattered, although I did manage 30 on the leg press! I could only manage this and then had to come back home to rest, feeling my brain was shattered as well as my body. 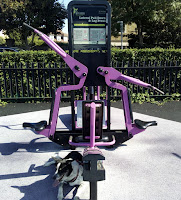 Anyway ... Despite wondering why I kept it up, hoping that at some point I would get the benefit of being fitter- and not just far more exhausted, I continued with using it whenever I could. Yes I missed whole weeks at a time, but even in the winter I tried by putting a plastic bag over the seats so I could use them when they were wet.

The fact my collie dog Enzo is a creature of habit and walked into the gates of the gym each day without asking probably accounts for most of the reason I went! 😬

Anyway... This summer I have finally noticed the positive side effects. 😊

I felt muscles in my arms!😂

Not only that I no longer get so shattered after doing almost anything - my body is fitter from the exercise and no longer constantly reducing my limited reserves.

To some what I do is still useless and laughable, but I know how much better I am, and where I started from. I am now able to do 100 repetitions of each of the 3 arm exercises, and the one I could only 2 of I can now manage 20. 😁 A 10x increase is not bad! Plus I have almost a similar % increase with being able to use the various other weights, 'twisting' waist toner or my time and speed on the cycle machine.

I have for the first time in my life muscles that I can feel, and almost see, in my arms. The habit of making myself go there has finally become almost pleasurable!

So many times it would have been FAR easier to stop...

But for someone with chronic fatigue for years, brain surgery and losing most of my muscle mass and weight from being stuck on the sofa for six months ... I am proud of myself. 😇