I have felt I needed to celebrate my 3-year cranioversary for over 6 months. It was still such an emotional time for me. Thinking about the events of 2016 still made me cry.

Then not receiving ‘confirmation’ from the Health Ombudsman that ‘the doctors were wrong’ nor getting a decent apology or paying me back for my private costs, still felt raw.

Like they had gotten away with almost killing me, yet no one even cared. I wasn’t worth it. There was no justice, no closure, no moving on.


So - I wanted to somehow celebrate my ‘second birthday’ the day that meant I was able to live again.

Do something to celebrate with others.

Organising a fundraiser for St George’s Hospital Charity and The Brain Tumour Charity seemed right - they had both been very much part of this journey.

This last month or so had been a struggle. I am sure my body had all the emotions of three years ago hidden and trapped in its cells. I had the same palpitations that I had before my op (and had these each anniversary after!) My neck I kept moving and then getting odd pains, my head ached strangely and then my scar areas just hurt.

I even got a couple of colds with coughs that ‘pulled’ my body to accentuate all the head feelings, the aches, the nerve damage, the tension. A spot came up on the top my head to remind me of the pain - in the exact mirrored position of where my nerves were damaged and felt as sore. As well as feeling occasionally like I'd been hit by a bus from all the coughing, which again just  reminded me of 3 years ago with the emotional shock and aching from crying…

Each time a date passed when an ‘event’ happened my body would tell me, and I would re-read my book and match the dates exactly with something- the date I found out, the day I saw the neurosurgeon, the day I went to hospital etc.

Yesterday I read a Facebook memory- and just cried.

Not knowing the outcome.

Then Dave saying ‘I’d done it’ as I was being wheeled out of theatre.

The knowing I was OK.

The feelings were still so raw of what could have been,
what was, how much it hurt.

Organising this event partly distracted me, but also it felt like a celebration.

For a while last night, I felt more than a bit overwhelmed. Trying to organise raffle prizes, balloons, banners. Then music starting, people talking to me. Selling raffle tickets… so for a while I escaped to the garden. Talking to friends and just reducing the amount of stuff going on in my head.

Then suddenly I walked back inside and was sitting next to another friend and I realised it was alright.

I was having my ‘second birthday’ party, yet it wasn’t about me, it was about the charities.

I don’t even know if others even knew how much I was celebrating, but that was perfect.

I’d all but lost my voice, so couldn’t even talk very loudly or speak through the mic even if I wanted to, and I very much had to conserve my energy and words, or I'd start choking!  I was forced to slow my mouth down so it had to think before I spoke, and I said to a friend:

“I have now celebrated my second birthday,
my second chance at life and I feel I can let go of the painful emotions of it now, and just keep the good ones.”

Suddenly I sat there realising I could celebrate it- the 'new' me...

The new me was happier than the old one, more trusting, more appreciative...

Even with the wobbly times, fatigue, tired speech etc… it was ME - and I was fucking proud of myself!

Yes, my soul had been injured, but it was finally healing - I was accepting all of what happened.

Finding the lowest points mean I can really appreciate the better times.

My parents were there, my kids were all there. I was proud of each and every one of them. Others telling me how amazing the kids were. Feeling like I hadn’t fucked them up after all with having to cope with a mum with a sick brain…

3 years ago I woke up after surgery knowing something different inside, something that changed me for ever.

And I am more than thankful. 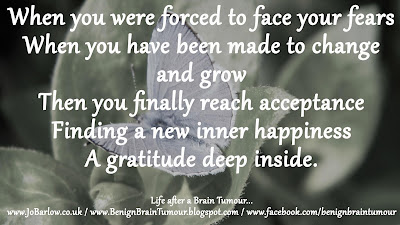