Vision after Brain Surgery - Normal or Not?

My vision has been annoying me for months. Actually make that years, as I have been struggling with it since 2015, it has just not been a high priority with everything else that has gone on.

I was told at the hospital back in 2016 that my tumour should not have affected my vision, as the tumour was in my cerebellum. Even though before and after surgery my vision was awful - jolted and blurry before, and after the world spun a lot! 😵 But they seemed to think that was the hydrocephalus and then the surgery after effects, not damage to my eyes or any long term vision problems.

At the time I couldn’t manage to see anything close up. I remember 3 weeks after surgery taking my earrings off for an emergency scan and not being able to see to put them back together and dropping one on the floor never to be seen again. (I also struggled with coordination too, so I couldn't even feel what I was doing)

I wasn’t able to see my eyes in a mirror for weeks.

I just about managed to put mascara on a month after surgery – as I was going to my uncle’s funeral and I wanted to make an effort to say goodbye to him.  😥

But as I had been very short sighted for over 20 years before (I had my eyes lazered in 2005) it wasn’t something that concerned me too much as it felt my body was still used to bad vision as I had often managed to do things, half blindly, even with no glasses on in the past. Plus as I had been told this would go in time, I just dealt with it along with everything else. After brain surgery there are many concerns and stressors!

6 months later, when I could apply for my driving licence again, I had my vision and peripheral vision checked via a DVLA optician and was told all was ok 😊 My eyes were mildly short sighted again and she suggested I use my glasses for driving – although I didn’t legally need to use them. I was delighted but my vision close up still didn’t feel ‘right’.

My eyes were also fine according to my previous optician. Although I had changed prescription since before surgery - as now the opposite eye to before was short sighted?! How much was this possibly caused by the tumour or hydrocephalus?

A few months later and after a follow up neurosurgery appointment saying there was no reason why I would have issues with my eyes, I decided to try a different optician as maybe I was going long sighted (needing reading glasses) and, after all, I was about the right age…

But again the new optician could see nothing wrong with my eyes, I wasn’t long sighted (well very slightly in one eye, but it was very mild) and they thought it might be as my eyes take longer to focus. One eye being slightly long sighted the other slightly short. Just to check I also tried the reading glasses you get in shops and they didn’t make any improvement. 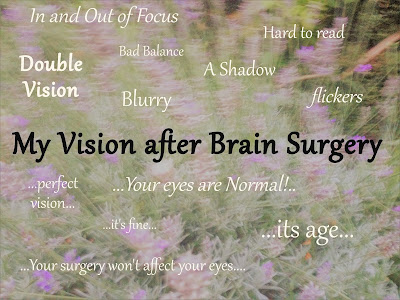 But close up art was still impossible most of the time, and sometimes I just could not read a book, then other days it was ok.

I could never work out why and when it would be really bad or why occasionally I felt my vision was improving…?

Roll on almost another year and optician appointment and my prescription was still the same - they had no ideas why I had blurry patches when looking close up or struggle to read. Again they did extra peripheral vision checks and all was fine. They again put it down to my eyes being slow to focus. I certainly did not need reading glasses!

Then at the start of this year I saw the Neuro-Optometric Rehabilitation Association website mentioned and this page with common eye problems following a brain injury on it.

THIS was my vision!!

And some of the issues I was having are supposedly ‘common’ after a brain injury!!

I feel my eyes can be somewhere between these at various times:

Also that when I read a book my eye movements do something like this, although the text I am reading goes paler, not bolder.

So I decided to try and ‘monitor’ my vision, when it is bad or good, with the hope of getting some optometrist to help me with it. These are the main issues:

In my quest to work out the issues I also watched a couple of helpful recording’s:

Understanding Vision After a Brain Injury

…and well I definitely think something can be done to improve my eyes!

After lots of emails and asking for a referral to Neuro-ophthalmology I am awaiting a (rather slow) NHS appointment to see the Neuro team who will hopefully refer me on… not helped that my original appointment for next month being cancelled and the new one booked for August!!

I will also contact a vision therapist, but I have a feeling it won’t be cheap and I am not sure if we can afford that right now, so I may have to wait for the NHS. As i keep reminding myself this brain tumour has taught me patience! 😬

These websites also have some helpful information and links to Vision Therapists:
https://noravisionrehab.org/
https://www.covd.org/page/Braininjury
https://www.advancedvisiontherapycenter.com/treatment/neuro-optometric_vision_rehabilitation/