I managed to get my 'cancelled due to corona' MRI re-booked by writing a letter to my neurosurgeon saying I believed I already had corona and that I really wanted my scan still, as waiting was causing me stress. Not knowing if the after effects could possibly be returning symptoms or not. Anyway a week or so after asking I got called saying they had a cancellation and would I like to go next week.

So I've had a week of extra scanxiety. 😬

The scan was on Wednesday 3rd, and when we get to St George's the hospital was half empty, no outpatients, nothing. Loads of beds double stacked empty in corridors, we were lucky to cross with one or two people in each corridor and over 3/4 were staff  - considering they only had one entrance open at the moment this is insane! Normally it's as busy as walking up a small high street - and that's when all the entrances that are open, not just this main one. 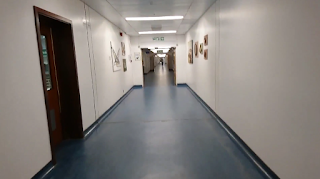 When we got to the neurology scanning area (after walking past the lift outside that theatre where Dave had to wait for over 6 hours... 😶)  there was no one there, just a bag on a chair to show a staff member must be around somewhere.

I looked to check I was in the right place and among my name could see there were 5 other people on the booking in sheet. (Normally it's 2+ pages)

Signs were up on every other chair in the waiting area, saying you could not sit next to another person. Good job there were two near each other that both weren't out of bounds, or I would have ignored the sign or sat on Dave's lap! 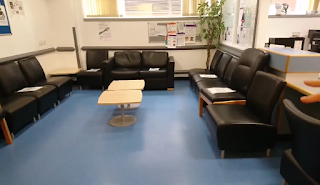 Eventually someone walked over, I assume a radiographer, telling me to fill in a form and here was a mask. That I had to wear a mask in the scan! I told her I didn't want to as it would give me a panic attack, and that I've already had corona.  She huffily said it wasn't for my benefit it was for hospital staff safety 🤔

Cue extreme stress and a rather illegible form as I already couldn't think straight!

I took a mask and promptly ripped the inner, more plastic, layer open so if I had to wear it I could breathe better, but refused to put it on. I was seriously thinking about walking out as I didn't want to wear it, I was freaking at the thought. 😔

Another radiographer arrived and discussed with the stroppy woman which of them was doing this next scan, something was said quietly and thankfully this other woman said she would do it and took me down. 🙏🏻

The Corona rules there are stupid (as they all are!) I HAD to get changed as they wouldn't let me in the scanner wearing my clothes. (Like my clothes would be more infected than my breathing, if I had Corona?!)

Yet I had to put my clothes in a (un-sanitised) locker and not just wear a gown over to cover them 🤔 (I had short leggings and t-shirt with no metal, so I knew I could wear them normally in scan) I had to keep my socks on and wear shoes walking in the scanner room 🤔

The radiographer thankfully accepted I wouldn't be having gadolinium without too much of an issue - I said my neurosurgeon agreed it wasn't necessary. She did go and check and came back saying that was fine.🙏🏻

They took my CD to play in scan, maybe they cleaned it & I didn't see, but insane if they didn't with the rest of the rules.

Thankfully no one mentioned the mask

(By the way, the staff have full masks and visors. Well some did, those near patients. Most staff walking up corridors, porters etc had nothing.)

But by the time I got in scanner I was stressed and panicking, it wasn't the machine or the scan as such, just this compounded fear or all the masks and rules which were not making sense. I felt I was stuck in some alternate reality where everyone is insane and I am the only one seeing past it...

I was in there and despite listening to the relaxation music, had to try to calm myself trying to do multiplication 🙄, wriggling my toes in order - anything to distract my brain! And after feeling for much of it I was constantly on the verge of pressing the buzzer to stop, I almost relaxed near the end.

I knew I needed to get this scan for my sanity.

But was in such a tizzy after I even ended up accidentally pulling emergency cord while getting changed! 🙄

When she gave my CD back, I asked the radiographer why I didn't have to wear the mask and she said they had already had another patient not able to wear one earlier and she was OK with the 'risk', she also said not wanting to be stuck in scanner with a mask is understandable and a very valid reason. 💜

I was so stressed with the whole experience, far more than the actual MRI (although not knowing if it's OK or not is a stress in itself) that had a huge panic attack that evening once I got home. 😞

I didn't hear or see anything to suggest anywhere in hospital was busy . Didn't even hear or see an ambulance, which is very strange! Normally it's an all but constant noise.

Dave had walked down to cafe while he was waiting for me and said he was the only person in there.


I hate to think what it will be like once they start having routine appointments again. 🤐

Also I realised that the masks are almost giving me some kind of PTSD. I knew I didn't like them (and don't agree with them for lots of health reasons) but this hospital trip was a very unnerving experience...  the fear is just magnified 1000x as everyone is acting like everyone else is a potential killer. You can't even see if the staff are smiling at you, or get a human connection... The lack of humanity got to me 😢

And hearing they now want masks on public transport and staff are wearing them in shops is affecting me. Too much like surgery ... Too inhumane 😬

So now I wait... feeling rather stressed and trapped in a mad world.