Two days ago it was my birthday 🎂 I ended up spending it at home with my family. No surprise there being that the country is on lock-down! 😁


On the surface there was no presents (as no one could get to the shops), no meal out and I couldn't even get a takeaway of food I wanted.

Last Saturday evening also should have been having a birthday gig with my husband and son's band. It is the singer's birthday the day before mine so last year it was a fun event. Nothing pressured, just an enjoyable evening. But this year everything is on stop...


Apart from their presence in the present -
which I guess is the best type!! 💜

But then I never much liked my birthday, I hate people fussing over me as they are 'supposed to' rather than they 'want to' (Just to let you know - any other day of the year and I am up for treats!) and I am not the artificial huggy, kissy type. If you get a hug it's as I mean it, and care. We even chose to get married abroad as I didn't want a wedding what feels to me a fake, and expensive, parade.😬 So I guess 'nothing' doesn't upset me too much?! Not much different to lock down being quite like our normal daily lifestyle...

But I did get a birthday spent outside in the garden, with blue sky and no 'plane lines' (even if it wasn't as sunny as the day before.) The loudest noise for most of the day the birds nesting in the bird box in my garden, rather than the constant volume of traffic driving past, the constant line of planes in the sky or the rumble of a transporter dropping off cars to the garage nearby, or people revving engines. I spent much of the day planting seeds and sorting pots for growing veggies in what felt a far better environment than usual.

Plus, as it has rained in the night, when we went for a walk that morning the trees outside had dropped their white pollen, so it was like I had a layer of natures confetti at my doorstep, all down the road and at the park instead. Nature celebrated quietly with me.💜 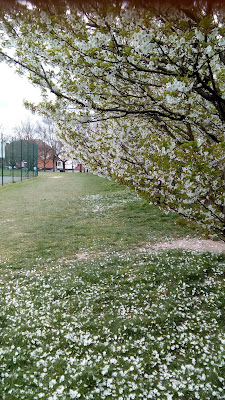 And... for some reason, I still find the date of my brain surgery, my cranioversary, more of a celebration of still living than my birthday. Maybe as not many have a cranioversary day, or a second chance at life, it's a bit more special?