This last week has been total shite.😥

I have been feeling really stressed. So much so that I couldn't cope, had switched off and gone to bed, or have been in an insane panic for no big reason. 😰

On Monday I decided to post something on my Hemangioblastoma Facebook group, saying 'The after (brain tumour) anxiety is tough at the moment'. As I did so I listed the reasons I felt I was stressed and with it I wrote down one of them - that my husband had just had a CT scan of his brain (for nasal issues) and we were waiting for the results...

The hospital had send a letter changing his follow up appointment to October, and so he called them after having the scan to say this wait was not acceptable. Mainly as the Dr wanted to see him shortly after taking medication and getting the scan, not 3 months after it.

But they then offered him an appointment for this week!


Suddenly I felt sick, as I realized this had triggered a massive reminder of shock and fear in me of when I had my 'reassurance' scan.

Far to many 'What if's' for my brain to cope with.
Sheer panic.
It was like my nightmare was returning and we were going to go through hell again.
I was terrified.

Plus some intense memories of the day I was called back to the hospital. Shown my brain scan pictures. Being told i would need urgent brain surgery! Realising how ill I was...  The day my world stopped for a while. The day everything changed.

I was feeling all the emotions again like they had just happened yesterday. Explaining it to the kid's all over again.

I had thought I was 'over' this memory, but just waiting for these brain scan results brought it all back home in one PTSD hell...

Yet I didn't even fully realise until I wrote it down...

tears pouring down my face...

As I wrote these emotions down it did partly calm me in just realising the feelings I was having were not me going insane but the trauma.

It helped me even more on Tuesday to be told Dave's head was ok! 💓🙏💓 (They don't even want to do anything with his nose at the moment) But several times that day I had to bite my tongue to stop the tears.

But that evening I felt totally stressed and panicky again, knowing it was the memories that were causing it. So I started writing it all down, feeling all my emotions and releasing them in floods of tears.

However the next couple of days I was aching and had sore spots and pains, I was getting so stressed again wondering what they were...

Until I read a post about German New Medicine and pain (from Dr Melissa Sell) saying it is a resolution of a self devaluation conflict.

"From the German New Medicine perspective, musculoskeletal pain is due to the Healing Phase of a Self-Devaluation Conflict.

While you are actively in a pattern of Self-Devaluation your body is receiving the message “I am not [strong/smart/beautiful/worthy] enough”.

The moment they resolve the Conflict the body begins restoring and refilling the tissue that was eroded during the Conflict. This is the Reconstruction Phase!

It is during the Reconstruction Phase that a person will experience uncomfortable symptoms. The area will be swollen, painful, and they will be fatigued.

When you are exhausted and in pain (especially pain that was not preceded by an obvious injury) it can be very easy to DEVALUE yourself for not being able to take care of your normal responsibilities and obligations to your family and/or job.

Add to that a trip to the doctor where they tell you “nothing is wrong with you, it’s all in your head” and this is the perfect storm for a persistent thought pattern of Self-Devaluation which is what started this whole thing off to begin with."

So I cried even more!

With realisation that I had totally devalued myself. That I still struggle to find 'me' after this experience.

Feel I shouldn't have been so weak, constantly worrying. Hating what I had done to my kids. What I no longer was.

I felt the worthlessness fully. Felt the burden. The pain I put my family through.

That I ' should' be stronger, fitter, more mentally stable.

Not scared so much.

From the times when I could barely breathe from crying.

When I felt numb, yet everything hurt ...

That it was somehow my fault for having this tumour, for reacting how I did.


But after reliving my past and accepting it - that my feelings and my pains were just a response to these memories and devaluation... (and having a good night's sleep!) I woke up to find the physical pains as well as my emotions had very much improved. 💖


Very much looking after myself and being kind to me.

I still need to heal. Another deeper layer.


So I can say 'I was scared' and also talk about Dave's brain scan being OK
... without crying...💖 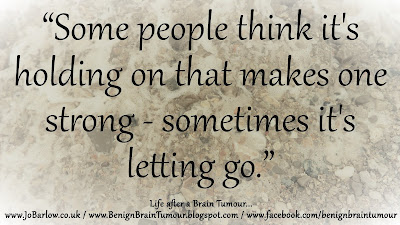