I love winter solstice – I have internally celebrated the shortest day of the year long before I knew anything more.


These horrid depressing cold dark afternoons as well as evenings are now at their worst, and today is the day where it starts getting brighter again.

The light after the darkness- which all felt so much stronger and emotional in 2016. A perfect metaphor for my year.

This morning, by some twist of fate, everyone went out. I had the house to myself. This is probably the first time in several years I have had most of the day alone. (I have 4 kids, one who is home educated and a husband who works from home- they don’t all go out for more than an hour at a time, and even that is very rare) So I took the opportunity to quickly put away the mess in my art shed and get some paint out!

I have barely painted since November 2015, that time I did some painting and I really struggled to see what I was doing properly and felt I couldn’t coordinate properly and didn’t know why. Then after the tumour I couldn’t even look at a picture without spinning, it took weeks to even see in the mirror to put mascara on my eyelashes and not all over my face or eye instead. Many months to even be able to colour in basic colouring in books and not just go straight over the lines. I couldn’t type without looking at each letter of a word on the keypad.

I did a couple of paintings near the end of last year, and they didn’t feel, or look, right. I couldn’t do anything detailed and so stuck with very abstract ideas and basically they were not much more than art therapy for me. I felt angry with myself. Disappointed. So since then I didn’t really want to upset myself again and was a little scared to do any more and fail. I loved painting, it was better to think I could do it still, and yet chose not to, than face the fact I couldn’t now do so.

Yes my son was living in my art shed this year, but he has been gone for over 6 weeks and all I had managed to do was tidy it. Procrastination has been my middle name.

But today the shed was empty, I have a heater in there, I have all my paints, canvasses and brushes all ready and waiting to be used… and everyone was out, for several hours.


If I fucked it all up, I could just pretend I never did anything and they would never know.

So I had no real excuse and just lots of reasons to try.

I was actually thinking of making something with mod-roc, just to feel the texture on my hands and make a mess, but realised I needed to use acrylic paints (my favourite) and get texture with them instead.

So I got a new canvas out and just felt what I wanted to do, I wasn’t planning to make a pretty picture if that wasn’t what wanted to come out, and it wasn’t. But then a few layers later and I realised I wanted to be positive, and so it changed. In the middle of a very wet layer waiting to dry I found the, somewhat unfinished, pictures I did last year and decided to layer over them. Give them emotion.

I still very much had my brain tumour experience in mind and needing to be expressed in the art. So one painting felt like the ‘me now’ picture with positive words, hearts and flowers. It doesn’t even feel like made up words- it feels real, how I am now. (At least most of the time!)

Another had a darkness around the outside, and lots of red (I guess after all it was a blood vessel tumour and unconsciously I painted the colour that represented it) with brighter colours and ‘go within’ in the centre. I had to go within last year to start to trust I would be ok, to heal from the pain of it.

Another had butterflies coming out of the chaos of the rest of the paint. The final canvas I painted over was from last year when I had tried to depict the image in my head of the Angel shadow figure at the other side of the room that I saw after my operation. I wanted to keep the rough idea of it, but the picture was messy and I needed to give it more depth; so basically painted over it and made the colours and shapes much bolder, plus added what I felt was being given to me at the time – love- painted in the form of a heart being given from the Angel’s hand. It still seemed to have a space at the bottom and so I wrote what I felt this image meant - ‘You are Safe’.

I literally finished this picture and put all four pictures on the wall to finish drying and Dave walked back in the door. Just as the light was fading too. Perfect timing.

But it was bliss! 💕 I ended up painting some with my fingers, to feel what I was wanting to show on the canvas. I did struggle a little with smaller details, but this might have been to do with the fact I couldn’t find any smaller brushes! But I could see ok, not perfect- but nothing like it had been, I didn’t drop the brushes on the canvas or feel somehow I couldn’t paint where and how I wanted to. I now feel I can try finer detail again on something else later, and accept it if it doesn’t work well. But the best part is I can ‘feel it’ again. And for that I am very thankful. 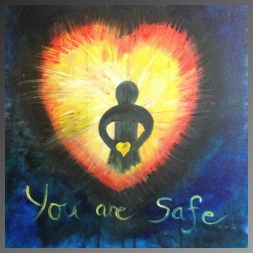 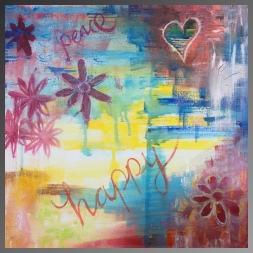 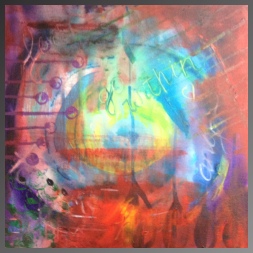 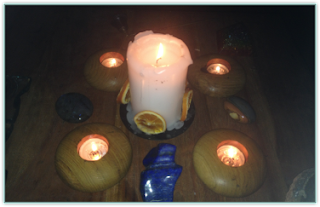