Music, crackles and tuning in...

I recently found this quote I had written back in October 2009 appear in my Facebook memories:

"Was listening to my very crackly radio in the car today and decided that it's rather like life... you can either 'tune in' to the music and enjoy, or just focus the crackles and start to go insane.


I find it quite ironic when posts like this appear. This was written years ago, years before I ever knew anything about a brain tumour, when I know I didn't understand it as deeply as I do now, and yet it very much applies today.

I have had a tired week, I have had a wobbly and uncoordinated week. My neck and head has been  itchy, the muscles tight, sore and aching. Several times I have felt myself having to re-balance myself, and my vision, reminding myself that the symptoms are just a side effect from the tumour or surgery and everything is OK. To keep going. To get on with it and still take the dog to the park even though a big part of me wants to just sit down as it doesn't feel right.

A couple of these occasions were even as I was listening to music - watching my son and husband playing in their band at a rather loud gig - the bass felt it was going through every pore of my body and vibrating it, the guitar felt just slightly too high and loud for my head... part of me wanted to get away, move further away from the sound and lights.


I felt that if I focused on these feelings I would need to move away and go and sit somewhere quieter, which I have definitely done before.

So instead I told myself I was fine, maybe just a little more tired and sensitive that I know I can be at times, but certainly not something I haven't dealt with over the last couple of years... and to 'get on with it'. Listen to the song.

Then somewhere in the 'tuning into' the music I lost the negative, the fears, the frustration and just felt the power of the music instead. Feeling a huge wave of love, strength and energy rise over me instead. The timeless rhythm that engulfs my soul.

Music always has been powerful to me, a way to express, a way to calm me, to cheer me up, as well as a great healer. It is even better when people that you love are playing it, you can feel their passion too. 💕


I had listened to an old album last week and there was a song on it I had not heard since I was a teen, suddenly in the middle of tidying the house (loud music always helps with this chore!) I just started sobbing, massive tears running down my face. At first I thought I was a little mad, then realised this song was reminding me of something I had hidden, something I couldn't face many a year ago, and so I just listened to it a few times until all the memories had risen and been released. Along with the hurt, the pain and the anger I didn't know I still had inside. Until the tears stopped... and the emotions went with them.

Until the song just made me smile.


Every time I feel this magic from music, where my hairs lift up and I feel shivers down my spine. I think of playing Muse on my iPod the day after my surgery... I had been terrified, was still terrified, my meditation CDs were no longer working ... yet a few songs into their 'Live in Rome' album and I was tapping my foot to the beat. Calm. Tuned in. Just as I had been only a few weeks earlier, listening to a whole stadium singing along to their songs. Feeling the connection. Not just with the band or the song, but with the planet. The knowledge it's all OK.

So this is my challenge for a while... any time I feel negative emotions, I am putting some music on and tuning in.

Even if there are some crackles. 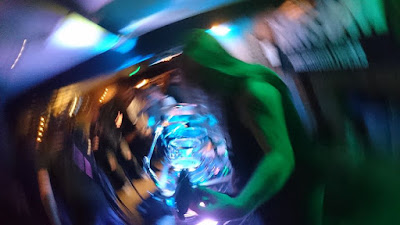