Words - Do You Think or Feel Them?


As you may have heard me say, I go to my husband's (and son's) gigs at local pubs and clubs most weekends. I often sit alone, and often end up singing to myself!😁

Yet many a time I have realised I only remember some of the lyrics, and I am a few seconds behind with the words I do know, like I have to hear them to remember them. 😬

It annoys and upsets me.

I get frustrated with myself and my slow brain.


As does any situation where I cannot find the words for what I want to say, when I want to say them. The more I try and think, getting frustrated that I cannot remember, the more I seem to not be able to say things easily...

If I am explaining something when I have time and feel calm - it's fine. If someone is rushing, I feel I need to give a quick response, or I am feeling stressed - I might as well just point to things, as it would probably be more effective!

Or if I am wanting to say the table, but am looking at the sofa I just say the object I am looking at... or it can be what I am reading, or thinking ... Yes I have said a few rather awkward things. 😬 Like this incident I posted on my Facebook page a couple of months ago:

The response in my head, and what I thought I said:
"I picked it from the top of the plant, he can't get his leg that high"

My actual response (as witnessed by 3 of my family)
"I picked it from the top of the plant, he can't get his dick that high" 😳😬😂


It's like my brain is simply not fully awake, getting stressed and then randomly choosing a word from the multiple choice list in my head!


Anyway, back to the singing...

Last night I had to put on my music quite loud to drown out the sound of the fireworks for my rather anxious Collie, and as I was alone with loud music I decided to go for some sing along rock to add to my playlist, much of them sentimental songs from my childhood or when I was a teen back in the early 90s.

At the start I was trying to remember the words, as I felt it would help me just by singing them... (some of the songs I had just found in playlists on Spotify and so I hadn't heard them more than a couple of times on the radio in decades) and yet the more I tried to think what the words were, the more I was a few seconds late in singing them, if I remembered the words at all.


Then I just gave up and tried to 'feel' the words instead of 'think' them ...  and suddenly I remembered  lyrics from songs that I hadn't heard for 20 or 30 years.

Somehow as the next line appeared it just was there in my conscience, if I stopped 'trying' to find it I 'just knew'... 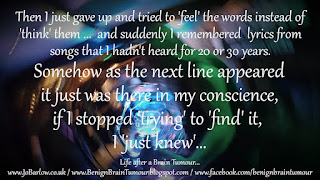 I had a great hour or so singing along to old Fleetwood Mac, Gerry Rafferty and Rolling Stones, although I'm not so sure if the dog did.  😂

I guess it's all but the same as when someone asks you the name of another person and you just go blank, and the more you think about it the more you just cannot remember. But as soon as you say "I can't remember" and look away and then look back at the person you can just instantly say their name without thinking!

Plus I know that since my brain surgery I also do a similar thing with even quite common words, whether I am writing them down or saying them. It takes a while for the word to appear in my head and I have to either think of all similar words that are close in describing it or shut up and just wait for it to appear.

This was also a clearer example of a recent realisation I had when I was talking to a friend. She was someone who I felt comfortable with and able to express 'me' without having to worry how I sounded or what she would think of, or how she would judge me. We had chatted for about an hour when I suddenly realised that not once did I feel frustrated or stuck for a word. Yes sometimes, I guess, I was trying to discuss an emotion and it took a few words to get to the root of the feeling, but generally as my conversation was about my thoughts and feelings and not superficial things ...


So just like feeling the music, I am planning to slow myself down and 'feel' answers rather than having to 'think' them...