Accepting Myself after Brain Surgery


This is not a post to brag about me, as I know I am far from perfect.

But this week I have had 3 people tell me how they love me, how amazing I am, and they just wanted me to know and realise this fact 💜 and then just gave me a hug right where I stood 💜 Plus a few other people who have spontaneously hugged me!

It has so helped me feel better about myself 💜

As ... sometimes it's hard to keep being 'you' in a world that wants you to be something different, a world that judges you on what you look like, every mistake you make and where what you possess equals how admired you are. 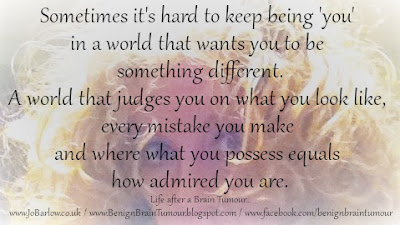 On lots of these I don't have much.

Up until a couple of months ago I was starting to become totally depressed with 'me'.

The fact I still say wrong words so often after my brain surgery, the fact I'm so often fatigued, I have no money, barely any monetary possessions, no qualifications, many of the skills I had went a bit AWOL along with my tumour surgery & I realised I certainly had PTSD from it... plus I have certainly been feeling and looking my age. 🤔

A couple of months ago I realised I needed to let go of the 'shoulds', and to accept my 'faults' as they are.

I would have been dead if it wasn't for an amazing team, led by Mr Jones who took my tumour out. They gave me another chance.

I realised again something that I knew inside but had been buried in the changes in my life ...

So what if I sometimes get the word wrong,
struggle with feeling shattered, worthless or don't live up to 'normal'.
So what if I don't look 20 any more, I'm fucking lucky to still be here.

Heck I was born with red hair
... I was born to be 'me'
...to stand out and be a little different.
I've always had a bit of rebel in me,
so why am I taming and changing myself now?

I went through the hell of surviving a brain tumour, the total and utter physical and mental exhaustion, the terror, the having to accept, having to trust... The comments and judgements that still happen when I'm tired or my brain and body have not yet woken. Their judgements, when no one knows anything about me, nor my life...

The fully letting go of how others see me, after all how can you do anything else when you have been seen at your worst for months, where you spent most the time crying, feeling awful and you cannot even see well enough to put make up on if you wanted. 😑 Not that at the time I cared one bit. It was the last thing on my mind!  You totally lose the illusion that it matters.


Who wants to be a cloned, fake Barbie doll anyway?
I like being REAL...

I never wanted to me anyone else but me,
so why was I getting so stressed with what I couldn't do now?

I let myself off the hook. Stopped judging me. Stopped getting upset with my struggles and focusing on my positives and improvements instead.

During the months of brain surgery recovery, where it took so long to wake myself up each morning and even longer to open my eyes. Part of me stopped judging with my eyes, and instead feeling with my heart. I needed to keep 'seeing' things that way...

Do I actually give a shit if I have wrinkles or an odd white hair? No, as if I shut my eyes I don't see that, I feel my soul.

I have learnt so many lessons during the past few years...  Of what really matters.

After surgery I had been hit with the realisation that I had spent years, decades, worrying over so many issues, but how many had actually come true? Probably less than a handful!

But had a ever worried about getting a brain tumour? Not for more than about a minute! Did I get one anyway? 🤔🙄 And if I had thought about it, what would worrying about it have actually helped... ? Absolutely nothing. Just made me feel worse for far longer.

But for several months this realisation went again, disappearing with the daily struggles, the why's and the feelings of stuckness.

I know I could easily worry about so much just from my head symptoms alone, and can easily think is it my tumour returning. However I had been talking to the lovely Ivana who reminded me how my thoughts create my experience.

I could either see my half numb head and it's increasingly itchy or sore scalp sensations as a sign of a problem or that, instead, my nerves and muscles that were cut in surgery might be growing back and healing themselves? Sensations returning. Yes it might be that they are very weird at the moment, but which of these thoughts will make me feel better? 🤔

I also fully realised I'm an empath. I feel others emotions (the strange sensations are very often not my own) and their pain that I often don't think they fully realise. I am someone who will happily hug another person in this understanding.

It's fine for me to do what I need to reset myself.
To be me.
The full unabridged version of me.

With that... My mood nearly changed overnight! 😁💜

And my happiness, and hug levels, have rapidly increased  💜