I have disappeared for a few weeks. It's taken me this long to find myself again.

I had a neuropsychology appointment at the end of November that didn't go as expected 😕 I went there  thinking I was getting some kind of cognitive tests or thoughts to help with my hand, head feelings, vision, fatigue and how they have changed so much since surgery. How to cope better with the new me.

But instead she focused on my (health) anxiety as I, mistakenly, said near the start of the meeting I had it for years. 🤔 (Since my boyfriend drowned when I was 17, after telling me the week before he would be dead within a week. 😑  I admit it took me years to get over it and I guess part of it has never fully gone, something like that does imprint on your brain slightly.)

But for this woman to judge me on who I was 28 years ago, telling me what I needed and what I was doing and why, even when I didn't relate to what she was saying - it felt a joke...

I wanted support not judgement.

"I am me. I was abused, made to feel worthless and shamed, manipulated to doing what others want. Put down. Ridiculed. Left to cope with premonitions, alcoholism and then death ...when I was a child.  A fucking child!!!! It literally tore me up inside. While I was made to pretend.  On the outside no one knew.

I have had countless days when I never thought I'd even make it to the end of that one. Countless nights with inherited emotional worry and stress consuming every fibre. Feeling the physical pain of others.
Yet, I brought 4 kids up... Me doing most of the physical day to day work. Exhausting. Emotional. Non stop. Without payment. Without even having a drink at the end of the day to calm me. For 25 years so far...

Fuck I deserve more credit than this...

Then I went through hell with my brain tumour. With how much hospitals terrify me. How I don't trust dr's to do what I want and that I always need to be alert. I had to be my own representative much of the time. Yes, there was a point I did have to trust and let go, but soon enough once again it was back to me. Looking after myself. Looking up things to help me, support me. Yes, I know family helped with cooking etc and took many of the daily tasks away and of course I am thankful for that, but I still did many things myself, and all of my own health care.

I feel I got through it far stronger than I started. I survived what I thought would kill me.

But, as ever, the only way was to support myself. Like I have done for the last 45 years."

She also seemed to think that even talking to others on my Facebook support group for others who have/had hemangioblastoma's would be 'reassurance seeking' and make things worse!! 😬🙄 Even though this is the place where people understand most about the frustrations and acceptance of what I went though - as they went through the same too.  💜 Many have had surgery in the exact same area of the cerebellum, and have very similar side effects. The side effects I'm not 'supposed' to have...
Where I also support them, support others who are waiting for surgery and terrified.  Discuss things that have helped me, as they may help them too.

She kept saying over and over (in what felt a rather sarcastic voice, think Delores Umbridge in Harry Potter films) "Mr Jones says you have no medical issues now..."

When I said, "I know this, but I want someone to support me with what can I do to address the fact my life has changed, my hands curl and no longer work the same. I can't do (my passion of) art as I did, or sewing (I cant even thread a needle easily WITH my glasses on), or crochet ... I drop things, I can't even do up jewellery clasps without a struggle.

My vision is shit. It feels like it did before I knew I had my tumour. Oddly blurry and fuzzy. Yes I know I've got old and long sighted, but again I can't see properly at times even with my glasses on.

My neck often hurts as does my head. Yes I know things are 'normal' but what do I do to cope better with what I now have?

I've been to the GP, who does some tests - which are normal - then says to see Mr Jones as she thinks it may be tumour after effects, who (after waiting months to see him) says 'I'm normal', and so I'm back to the start with no one within a whole year who can actually help me with the issues ... Can I stop further deterioration? Do I need to do exercises? I know it might be nothing to do with the op, but it DID all start after it."

I never really got a reply, apart from she said again "but Mr Jones said you're normal"

I was gutted. In tears of frustration, disappointment and anger. Apparently this means I just have anxiety?!

Yes I know I have PMDD, my moods can drop and I struggle to cope with hormones, How feeling irritable, overwhelmed and tearful from hormones, as well as more fatigued, doesn't mix well with my struggle with the side effects from a brain tumour and surgery. The fatigue in itself makes my speech, coordination and balance all feel worse again. I feel a failure to myself and my family.

But none of this even came out in our conversation. I was too judged on the box she wanted me to fit into.

So she is referring me to another neuro-psychologist. Who she said would do more talking and then possibly refer me back to her for cognitive assessments only if I needed it. She also mentioned taking anti depressants - which I am about as likely to agree to as win the lottery.😬 I said to her "I don't take drugs as they don't suit me and have seen too many studies that anti depressants don't work more than a placebo or talking, and can even ruin people's lives." Which was scoffed at.

I only realised fully when I got back home...


I am not depressed - I'm fucking angry!

Not really mentioning that I need to talk... Or to feel useful and wanted.  To have others who understand and listen, or that I don't have enough other people to talk to and am isolated now.😕
So I'm still partly worried I'm going to get labelled as having a disorder and then possibly be labelled further as 'refusing treatment' - rather than them helping me with what I struggle with.... 😢
Not the best result 😔

Hence why I disappeared. 🙈

But a few weeks later, and I still feel I want to help others in similar circumstances to what I had cope with, I'd like to support them more as I understand from being there. I feel there is a place for me doing this, albeit I am not exactly sure how ... Yet hearing a neuro-psychologist saying I should stop as "it's reassurance seeking or stopping me moving forwards" feels so far from MY truth. It's empowering me. I did it. I coped. I have changed my view of life. I am proud of myself for doing so. I want to help others cope too.🙏

I know I need to focus on something positive, fuck me I know I can do more, but I could do with some support and guidance. What 'I' am interested in, not what others think it best for me. How to cope with my 'disabilities' (I can't think of another word, but I want this to be strong and accepting of the deficits I have, not the weakness) and my strengths.

It's taken me five weeks to find the strength again to both publicly 'tell the world' and realise writing my blog helps me, helps me move forwards, not holds me in the past.

And if it helps even one other person - it's worth it. 💜 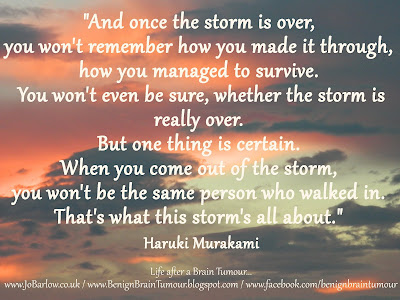