Every so often someone says something that upsets you. They have judged you on their beliefs and standards and can't, or don't want to, understand your point of view. I do understand this.

But when it's on my reviews about my book it angers and confuses me too...

I really don't get much profit from my book (it's probably not a book you would read if you didn't have a brain tumour or need surgery 🤔) so sales are limited, but every penny helps. Along with the knowledge that it has helped others and so I hope each sale is a little bit of trust to someone else facing similar...💜

But this was the comment I recently found on my Amazon ratings:

One of the worse books I've ever read. Sorry about her illness but couldn't read another word about "angels'' and diatribes against having to use medicines and "evil doctors'' who SAVED HER LIFE!


So I am now feeling rather upset and wondering...

Will people not buy or read it because of someone else's comments? (someone has already found the comment helpful!)

Did they stop reading as I said something they think is totally ridiculous?

Do most people think I am stupid?


Plus, also in November, I had someone ridicule me on my Facebook page by giving me a bad review because I said I'd stopped vaccinating my kids, knowing absolutely no reason why I'd stopped, just attacking me for my viewpoint!  Thankfully Facebook removed it. (as the review was nothing to do with my page)

I do realise that I am very much into alternative health, and confuse and even upset or anger many with my views - but are we not allowed to have 'different' opinions? Surely we all will see things differently, depending on what we have read, seen, heard, feel and have experienced?


So anonymous Kindle Customer this is partly why I wrote my 'diatribe'...

I have been into alternative heath from when I was in my late teens: my GP had given me a low dose antibiotic (tetracycline) for my acne from when I was about 12 years old, but within a year or so I had severe Irritable bowel syndrome (IBS). I couldn't eat most things without feeling really ill after, had to drink a mint powder to calm the nausea once I had eaten. I spent most of my teenage years with stomach bloating, pain and feeling nauseous.

During this time I kept seeing my GP and had them saying I was fine (whilst I'm sure all they did was pregnancy tests as I had nausea - they often asked for urine samples!) I went to a gastroenterologist, had a tube down my stomach at age 16 and yet nothing they said or did helped. Only the more 'natural' things I tried or avoiding certain foods helped - things I'd found out or been told by alternative health practitioners. I had asked my doctors so many times was my IBS linked to the antibiotics - as when I stopped them (which I had to every few months) it eased a little.  The response was always "no, it's definitely not related".

Roll on another few months, turning into years, and I read a dental nurse friend's medical book she had left at home which listed the side effects/reaction to drugs and sure enough a COMMON side effect of the antibiotics I was taking was nausea and stomach issues - basically the IBS symptoms I was suffering from!!! 😞😠

I stopped the antibiotics, although my stomach symptoms didn't fully stop with it, my gut was damaged by then.


I will also add that a dermatologist at this time wanted me to take Roaccutane and thankfully told me some of the side effects. I would need eye drops for my contact lenses as it dries up all moisture, and also that if I accidentally became pregnant I would need the baby aborted due to the damage it would do to it! This kind of terrified me... if it damages a baby this much, what does it do to my own cells? I was informed enough to chose not to take it. The side effects of this drug have since shown to be awful, including making people suicidal and destroying many lives in the process😥.

When I had my eldest child a few years after I was terrified morning sickness would be worse than my IBS... but it was a walk in the park to what I had dealt with for years!

30+ years later and my stomach has never fully recovered - I still cant eat wheat, have caffeine, alcohol or too much sugar and was diagnosed lactose intolerant years ago. (The doctors only believed me on that after they got test results... I didn't matter that I was on the loo all afternoon after drinking lactose for the test!😬)

My wisdom teeth were orange when removed (the dentist kept them to show medical students) and I later found out tetracycline can apparently damage your bones and growth. (I was the same height at 12 when I started taking them, as I am now 😑)

But not once did anyone acknowledge this.
Nor the fact that I shouldn't have been taking the damn antibiotics for almost 7 years anyway!!!!

So basically I got into nutrition, healers, alternative therapists - homeopathy, reiki, bowen, craniosacral, osteopathy etc. I healed much of my gut with diet and didn't have many medical procedures for years.

The few times I had mainstream treatment, maybe as I was used to looking at the causes and changing them instead of getting what I call an 'elastoplast' and covering symptoms, I was treated appallingly - including one consultant hurting me and saying "You have pelvic pain, what do you expect" after I all but screamed! 😡 And then actually laughing at me when I said I was trying homeopathy for 6 months and not accepting his laparoscopy just to 'explore'... He, still laughing, said he would see me in a year or so when things were worse. For what it's worth, I never went back as homeopathy, supplements and diet change helped, and so I didn't need to.

Since I started treating things holistically, it expands to all areas of your life. I stopped using mainstream chemical skincare and household products. I had, no drug, home births. (Again because of bad treatment with my first hospital birth- where Dr's went against my wishes in hospital causing issues for both me and my baby.😠) I co-slept with my kids. I breastfed them and never gave them formula. They had vaccine reactions - I asked questions, researched for YEARS and then stopped vaccinating. (The vaccine nurse actually going against the manufacturers vaccine insert and lying that my youngest son was fine to have his vaccines on time, when in fact he would have been contraindicated not to have them. Like I'd ever just trust them again after that?!😔)

I found most things can be healed with time, sun, a good diet and the natural herbs and minerals our planet has given us. My youngest son has been to the Dr's twice since he was a tiny baby. I didn't take even a single paracetamol for 10 years, I had no need to...


Hence why it was a BIG mind fuck when I
needed urgent brain surgery!!!


I was honestly as terrified they would give me a vaccine or a drug in hospital, when I wasn't aware or able to consent, and that could cause more future damage; as I was from having the op...

...and yet many people still laugh at me for questioning it...
Not trusting a profession who has hurt me many times and even got things so wrong they could have killed me in the past...


Not trusting things that are now being shown in places like the What Doctors Don't Tell You book, and many of the 'fake news' websites! Or the fact that medical errors are the THIRD leading cause of death in the USA.

Plus of course you can also add in the fact that my GP's had missed the fact I had almost every sign of a brain tumour for months, said "no" even when I asked them "could it be a brain tumour?" and refused to refer me twice to a neurologist on my requests. Then the health ombudsman ignored my case and basically said it was acceptable treatment!! (There is all the PHSO info elsewhere on my blog, and I am certainly not the only one where they have upheld part of my complaint, whilst ignoring the more serious concerns - see phso the true story)


Science should continue to change -
just like it has since cigarettes and thalidomide were
promoted in pregnancy.

But its treated like a religion where you cannot question the narrative...

Even if you look at most pharmaceutical drugs side effects or efficacy rate you might be shocked at how low the % of people helped can be. Look at placebo studies - they are fascinating as they often work as well as an expensive drug, or that placebo knee operations work as well as the real thing. (just look at David Hamilton's work.) Often many natural herbs, or IV vitamin c work as well, or better, as the best drugs on the market, but as they cannot be patented its not offered as a treatment - no one makes any money!!! Same as you cannot mention other cancer 'cures' due to the 1939 cancer act... even though many things have PROVEN results of even terminal cancer patients who are well again. Including nutrition, cannabis oil, GcMAF etc ... (The truth about cancer is a good place to start.)

So Kindle customer ... I truly hope these things change soon, its a scary world where our kids might be drugged and not given chances purely due to profit...


Plus I would also like to let you know that if you read the rest of my book, you would find out that I am forever thankful for Mr Jones for his amazing skills that I admit saved my life.
💜
You may also notice I dedicated my book to him and have given him a 5* review on I want great care.
💜
I also went out of my way to fund raise for St George's hospital.
💜

I can fully accept Dr's save our lives 💜 Although I wish more would admit that sometimes they don't know, aren't sure, even need to google or ask others doctor's opinions or expertise.  Some just need to accept the fact we are not machines and don't all work the same!  Or that information has moved on since they were at medical school and their pharmaceutical reps don't tell them everything. 😑 Or tell us we dont have something - as the symptoms we have were not signs of it in their medical books!!!

Another whole topic in itself would also be how they are expected to cope with the shifts and workload they are given on the NHS and expected to not make mistakes. I know the 5 nights I was in hospital, several times I heard one nurse explaining to another that someone had accidentally had a drug too early or similar. We all make mistakes when tired and overworked... and this, and much of the medical system, really needs to change for the amazing people who I believe are doing their best to help us 💜

Oh and re the angels -

I hope you aren't religious and pray to a 'mysterious god' of any kind?

Nor ever have the need to trust in something greater than us.

The prayer that gets us through... 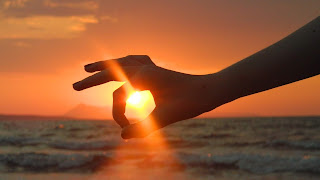 Finally, if anyone has read 'It's all in my Head'
and it has helped them in any way would like to leave a review on Amazon...
please do so. 💜

Email ThisBlogThis!Share to TwitterShare to FacebookShare to Pinterest
Labels: Acceptance, Alternative Health, Anger, It's all in my head, Medical Failings, Self Love
Location: Surrey, UK