After saying I felt normal for two days, my body has decided to remind me it's not.😒 For the last few days my neck has felt awful, cramping neck muscles below the 'dent' in my neck (where the muscles have wasted), the left of my spine aching as I know I have not been sitting or laying straight from the neck pain, plus the skin around the whole of my scar (from my neck to my ear) is just tight and seemingly pulling at times.

Each time I move I can feel the skin tugging, and sometimes I can feel it even when I am still.


It was only recently when I stood behind a bald man tapping his head to the music at a gig that I realised just how much the skin and muscles on our heads move. As he moved his head I was watching how the various muscles and the back of the head and neck responded, and that often there was a ridge of muscles showing - no wonder my neck struggles at times with so much muscle wasted and much of one side of my head having been cut open.

Even if the surgeons did a perfect job, there will be scar tissue from cutting into it and the muscles, as well as the fact that as I cannot feel much of my head I probably now move and use it differently?

I have also had the 'I cant wake up yet' exhaustion. Even after 9, or more, hours sleep I just cannot open my eyes easily and have to force myself to look at something to keep me awake. Although I have recently been doing more chores than I had been, so I guess a energy backlash is expected.

I have to keep focusing on the fact that I am now generally able to do more each day than at any time since several months before surgery, so about three years in total - in itself a positive.


Plus ... my dog has been sniffing my neck again recently. 😟 I know this shouldn't concern me, but he sniffed it loads before I knew I had a tumour and then stopped once it was removed (see here) ... so it does concern me, maybe more than logic wants to admit.

I think he knows I am tired and aching and is just 'checking up on me'. Who knows? But I cannot imagine the comments if I ask to get my head checked again as the dog is concerned!! 😂
Tim Jones would finally think I have cracked - not that he thought I was far away before. 😜

For now I am watching him and trying not to get concerned as he doesn't look stressed in general (although he did have a few days when he looked upset- but it is firework season) and his skin is OK.


I am also glad I treated myself to some Reiki this week. An hour of bliss in an otherwise stressful achy tired week. It feels like my neck muscle has been slowly relaxing since.

Maybe I just need to do some art and forget about all else? But I know it isn't going to happen, as I'm far too tired for even basic daily chores. So I just have to keep on doing the best I can and hope I get some better days again soon.


There is one advantage of hitting the bottom, in that you know
you come back up again. 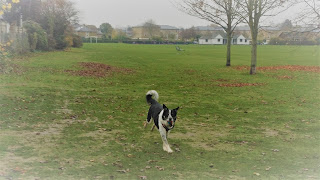